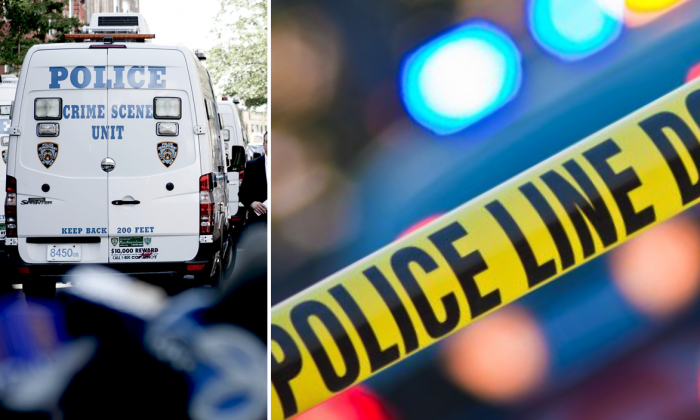 A 12-year-old boy is dead and 5 teens wounded in a gunfight outside a liquor store in Cleveland on Friday, Nov. 24. (Samira Bouaou/Carl Ballou/Shutterstock/modified by Tom Ozimek/Epoch Times)
Crime and Incidents

A child has been killed and five teenagers wounded in a gunfight on a Cleveland street, Black Friday.

The 12-year-old boy was struck by a stray bullet as two groups of teens between the ages of 14 and 16 clashed near a liquor store around 7:30 p.m. on Nov. 24,reported WKYC News.

When the shooting began, the boy and his father stepped outside the liquor store, which the father owned, to see what was happening. A bullet fired by one of the teens involved in the altercation, struck the boy in the torso. He died at the scene.  The father did not sustain any injuries.

The police have not released the identities of the boy no the father.

A 16-year-old involved in the altercation was struck in the head with a bullet, but is alive and was transported to the hospital. Four other teens have also been hospitalized for wounds, reported Cleaveland 19 news.

Calvin Williams, Cleveland’s Chief of Police, has conveyed condolences to the family of the deceased boy.

“We don’t exactly know what spurred this or what happened, but definitely our hearts go out to the families of the victims here,” Williams said, reports AP.

While it remains unclear what sparked the confrontation, police say that it is unlikely the individuals involved were members of gangs.

Officials say the wounded juveniles were standing outside the liquor store when a group of three to four males, also believed to be underage, opened fire on them.

Authorities are urging the public to come forward with any information that would help identify and apprehend the shooters, who fled the scene of the incident.