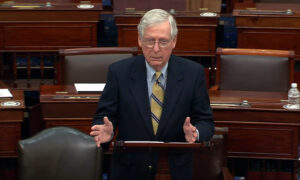 Authorities in Florida claimed a 12-year-old boy and a 14-year-old girl opened fire at deputies with several firearms, including what they said was an AK-47 or a similar rifle.

Deputies said they were searching for the boy and girl after they ran away from a foster home.

“So the deputies in the Deltona area go out looking for this 12-year-old and this 14-year-old because the 12-year-old is insulin-dependent and the 12-year-old, if he doesn’t get his medication within four hours, it’s going to be a critical medical emergency,” Volusia County Sheriff Mike Chitwood said, according to ClickOrlando.

Chitwood said that during the incident, the girl was shot in the arm and abdomen before she was taken to a nearby hospital, where she is reportedly in serious condition. The boy surrendered and wasn’t injured, he said, reported CNN.

“I don’t know what to say. Where have we gone wrong that a 12-year-old and 14-year-old think it’s okay to take on law enforcement?” the sheriff asked rhetorically.

The girl was wounded after she allegedly came out of the home armed with a shotgun and aimed it at the deputies, said the sheriff’s office. They said the boy was “armed with an AK-47” and “finally put his weapon down” after the girl was shot.

“Both children had fired at deputies multiple times throughout the incident as deputies attempted to resolve it peacefully. No deputies were injured,” the release added.