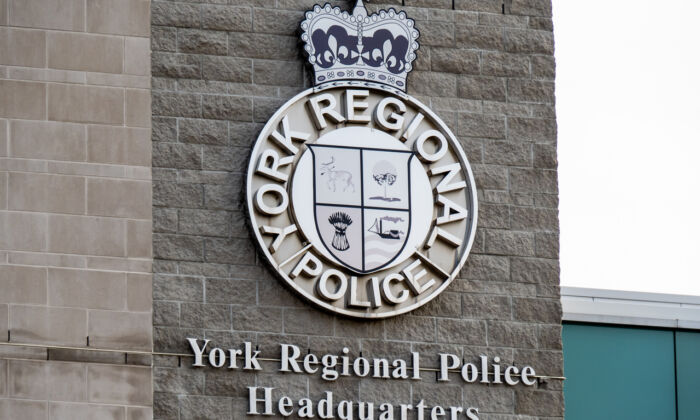 The crest of the York Regional Police on the headquarters building in Aurora, Ontario, on Sept. 15, 2020. (Shutterstock)
Canada

Ontario’s York Regional Police have charged 12 youths for a string of swarming-style robberies in the City of Vaughan in June, near Canada’s Wonderland and the surrounding area.

The youths were arrested and charged with multiple offences, including robbery, assault, mischief under $5,000, and causing a disturbance, the police said in a statement on July 20.

“In all of these incidents, victims reported being swarmed and robbed by a large group of young people in the evening hours,” the police said, adding that many victims were teenagers.

According to a charge list, all of the 12 arrested were teenagers, with the youngest being 13 years old.

In light of this, parents are being encouraged to speak with their children about personal safety when unsupervised, as well as the consequences of participating in criminal activities.

The arrests were part of the police’s Operation Beehave, launched over the Canada Day long weekend in response to a series of robberies last month in the area of Jane Street and Norwood Avenue, right next to Canada’s Wonderland and the nearby sidewalks and plaza.

The police said their efforts have been effective, and no more swarming robberies have been reported since the start of the operation. But they also noted that more arrests are expected as the investigation continues.

Operation Beehave will continue through the summer, the police said, adding that investigators will continue to work with Canada’s Wonderland security, community members, and business owners in the area to gather video surveillance, report incidents, and arrest offenders.

York Regional Police also encouraged any additional victims and witnesses of such swarming robberies to contact local police or Crime Stoppers at 1-800-222-TIPS.

The police also provided some safety tips to residents, including being vigilant of their surroundings and calling 9-1-1 when they suspect they are being followed. When approached by thieves, residents should remain calm and comply, while trying to note the characteristics of the robbers, weapons involved, and direction in which they fled.