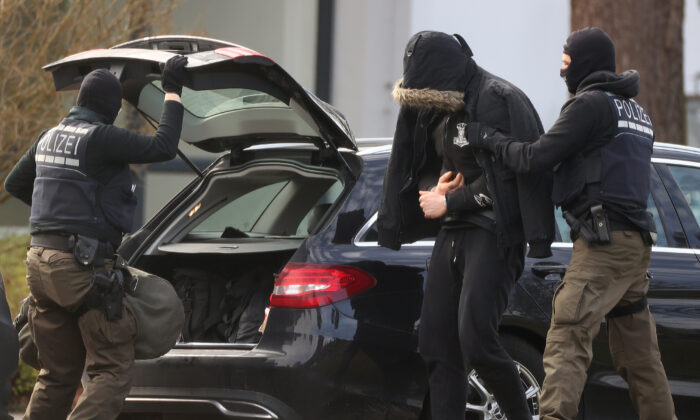 One of 12 men suspected of involvement in a right-wing terrorist group is escorted by police as he arrives for his hearing at Germany's general prosecutor in Karlsruhe, Germany, on Feb. 15, 2020. (Kai Pfaffenbach/Reuters)
Europe

Police in Germany have arrested 12 men suspected of instigating a plot to attack politicians, asylum-seekers, and Muslims across the country.

The arrest of the 12 men on Friday—including a German police administrative officer—followed multiple raids in 13 locations in Germany across six states, according to AFP.

The four prime suspects allegedly wanted to start “a civil-war-like situation” across Germany and were arrested on suspicion of forming a right-wing terrorist organization last September. The remaining eight suspects allegedly offered the group financial support and agreed to provide them with weapons or take part in future attacks.

Popular support for far-right groups is growing in Germany, notably in the country’s former Communist east, as part of a polarization at both ends of the political spectrum that is undermining the mainstream establishment that been in government since World War Two.

The group was named “Der harte Kern” (The Hard Core) when it was formed by the men in September 2019, reported the German Welt am Sonntag newspaper on Sunday. It had been under surveillance since late last year.

The suspects are all German citizens reportedly aged between 20 and 50, including the police officer, who in the past had been suspended after he was suspected of having links to right-wing extremism, a source at the interior ministry in North-Rhine Westphalia state told AFP.

The German Attorney General said in a statement the aim of the association was to “shake and ultimately overcome the state and social order of the Federal Republic of Germany.”

A number of weapons were uncovered in the raids across Germany, including a homemade “slam gun” which resembled the weapon used in the October 2019 attack on a synagogue in Halle. Investigators also uncovered stores of materials that could be used to produce home-made bombs, Welt am Sonntag reported.

Using Facebook-owned messaging app WhatsApp, the group allegedly regularly held meetings to plan their attacks. Two of the core suspects, named only as Werner S and Tony E, coordinated and organized the meetings.

Minister of Justice Christine Lambrecht said the arrests showed that there is “a very worrying right-wing extremist and right-wing terrorist threat” in Germany.

“We have to be particularly vigilant and act decisively against this threat,” Lambrecht added.

Authorities believe he was targeted for his stance of welcoming refugees into the country. Lübcke received death threats before his assassination for favoring German Chancellor Angela Merkel’s open migration policy.

Under German law, individuals suspected of being on the verge of committing serious offenses can be detained for up to 6 months, extendable to 12 months in extreme cases, according to legal experts.