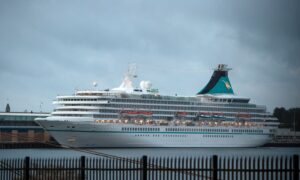 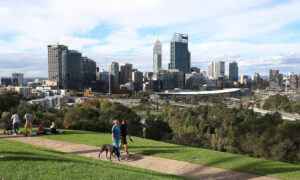 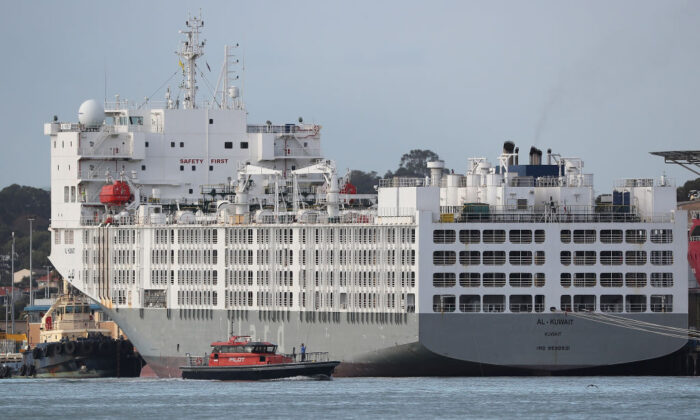 A Pilot boat motors past the Al-Kuwait berthed in Fremantle Harbour on May 26, 2020 in Fremantle, Australia. Six crew members from the Al-Kuwait livestock ship docked in Fremantle have tested positive for COVID-19. The remaining 42 crew are still on board the ship, which has been docked at Fremantle Port since May 22. (Paul Kane/Getty Images)
Australia

Another six members of the Al Kuwait crew and a returned traveller in hotel quarantine have tested positive to COVID-19, as WA recorded seven new cases.

Six more members of the crew on a livestock ship docked in Western Australia have tested positive to the Chinese Communist Party (CCP) virus, commonly known as the novel coronavirus, bringing the total to 12.

The Al Kuwait docked in Fremantle last Friday, carrying 48 multinational crew, but it took three days for WA Health Department officials to act on a federal tip-off that three people on board had fevers.

Six cases were confirmed earlier this week and on Thursday, six more crew members were diagnosed with the virus.

The department says 38 crew are in hotel quarantine but a skeleton crew of 10 remains on board.

Test results for local workers who boarded the ship, including a Fremantle Port Authority pilot and a trainee who steered the ship into harbour, are expected on Friday.

All of the workers were wearing personal protective equipment when they boarded the ship, but the tests are being done to confirm they are clear.

Health Minister Roger Cook says they are self-isolating at home while awaiting the results.

A seventh new case was also revealed on Thursday, a returned overseas traveller who is in hotel quarantine.

Meanwhile, discussions are under way to see if the rebadged Awassi Express, now named the Anna Marra, can take the 56,000 sheep that were meant for the Al Kuwait, which won’t meet the June 1 northern summer live export deadline.

The Awassi Express sparked the northern summer ban after footage emerged of thousands of sheep on board dead or dying from heat stress in 2017.

It is currently not far off the Fremantle coast.

Federal Agriculture Minister David Littleproud said his department may grant an exemption to the deadline.

The sheep are being held in feedlots and sending them to local abattoirs is considered a last resort.

Also on Thursday, WA Treasurer Ben Wyatt said the state economy would slump into recession next financial year, forecasting a $12 billion hit from the pandemic.

Premier Mark McGowan told parliament there was “no line of sight” when the state of emergency would end, with more than 16,000 Australians living overseas still trying to come home.

By Rebecca Le May and Michael Ramsey