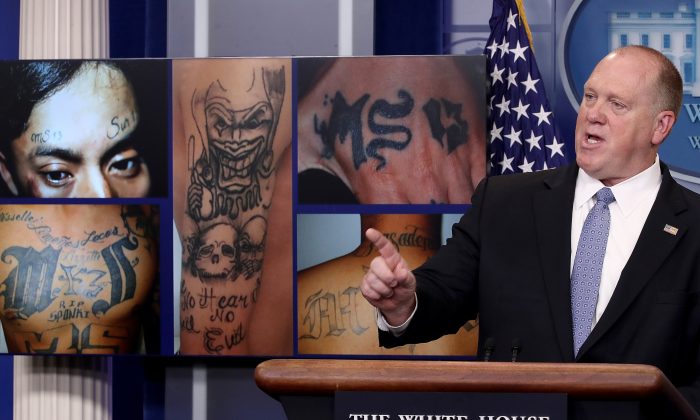 File photo of ICE Deputy Director Tom Homan in front of MS-13 gang-related photos during a press briefing at the White House, on July 27, 2017. (Win McNamee/Getty Images)
Crime and Incidents

A grand jury in New York has indicted 12 members of the notorious MS-13 street gang on charges of possession of controlled substances, burglary, possession of weapons, attempted murder, and conspiracy to commit murder.

The main defendants are accused of scheming to murder members of rival gang the Latin Kings, plotting to steal $80,000 cash from a Kew Gardens home, and planning the execution of a former MS-13 member.

Investigators taking part in the takedown recovered guns and drugs.

Queens District Attorney Richard Brown identified one of the main defendants as Jorge “Terrible” Andrade. According to charges in one of the indictments, Andrade and six others schemed to avenge the shooting and wounding by a rival Latin King gang of two reputed members of MS-13. Andrade allegedly conducted surveillance of a Latin King member and discussed his plan to beat the target with a baseball bat.

Another indictment said that investigators overheard another defendant, Josue “Colocho” Levia, talking about retrieving weapons for a hit on a former MS-13 member who had left the gang. Officials said that when the time and location for the planned killing were revealed, “law enforcement raced to the scene and got there possibly preventing a murder.”

“Gang violence, intimidation and out-right ruthless brutality will not be tolerated in this county,” said DA Brown in the press release. “These indictments are another example of how law enforcement and prosecutors can and will work together to stop the senseless killings in our communities.”

The majority of the indicted face up to 25 years in prison.

“Our communities have the right to be safe and not succumb to senseless violence between gangs in our city. These alleged members of MS-13 exhibited their propensity towards violence and murder when they plotted to murder a rival gang member in a place where the public congregates, with no regard to innocent lives,” said Angel M. Melendez, special agent in charge of HSI New York. “MS-13’s intimidation and violence will not be tolerated and law enforcement’s collaborative efforts are key to disrupting the lawless activities of this vicious street gang.”

MS-13’s motto is “kill, rape, control,” according to Robert J. Bunker, an adjunct research professor at the Strategic Studies Institute of the U.S. Army War College.

A huge deportation effort in the early 2000s, which expelled thousands of MS-13 members from the United States back to El Salvador, contributed to the gang taking hold in Central America. El Salvador is now the gang’s operational base.

The Justice Department estimates around 40,000 members live in Central America and 10,000 live in the United States.