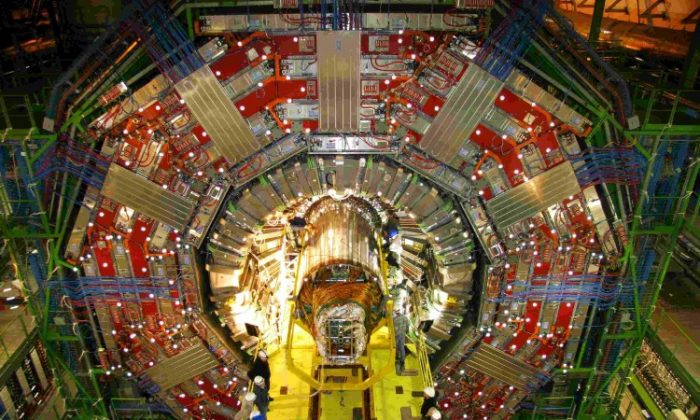 Based on the data produced by big detectors like the Compact Muon Spectrometer (CMS) at CERN, Geneva, the structure of matter can be studied in detail. (KIT/Markus Breig)
Science

The number of matter particles or fermions contained in the standard model of particle physics has been confirmed as 12.

Fermions are believed to be the building blocks of the universe, and include the electron, the neutrino, and the up- and down-quarks.

“For a long time, however, it was not clear whether we know all components,” said study co-author Ulrich Nierste at Germany’s Karlsruhe Institute of Technology (KIT) in a press release.

There are three generations of fermions, according to their properties, each containing four particles. However, only the first generation is common, whereas the other types mostly occur in particle accelerators like the Large Hadron Collider (LHC) at the European Organization for Nuclear Research (CERN) in Switzerland.

“But why does nature have second and third generations, if these are hardly needed?” asked study co-authors Martin Wiebusch and Otto Eberhardt, also at KIT, in the release. “And are there maybe more generations of particles?”

“There are exactly three fermion generations in the standard model of particle physics!”

A team of European researchers analyzed recent results from two different particle accelerators, including data from the newly discovered Higgs particle. They found that further particles do not exist with a certainty of 99.99999 percent (5.3 sigma).

The Higgs particle gives other particles their mass. As no other fermions were directly detected in accelerators, they must be heavier than known fermions, and would therefore interact more with the Higgs particle.

But any such interaction would have altered the Higgs particle’s properties, making it undetectable. A fourth generation of fermions is therefore not possible.

“Within the standard model, the number of fermions is now firmly established,” Nierste concluded.

The findings were published in Physical Review Letters on Dec. 11.