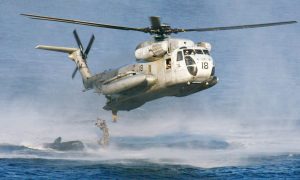 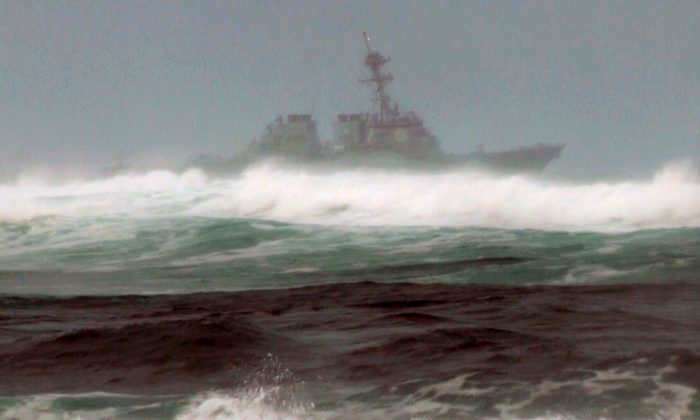 A search vessel cruises the waters off the beach at Haleiwa, Hawaii, on Jan. 15, 2016. Two Marine helicopters carrying 12 crew members collided off the island of Oahu during a nighttime training mission, and rescuers are searching a debris field in choppy waters, military officials said. (AP Photo/Audrey McAvoy)
US

There was no immediate word on the fate of those aboard or what caused the accident.

The choppers were part of the 1st Marine Aircraft Wing at Marine Corps Base Hawaii. Known as Super Stallions, they are the U.S. military’s largest helicopter, capable of carrying a light armored vehicle, 16 tons of cargo or a team of combat-equipped Marines, according to a Marine Corps website.

Elaray Navarro, a retiree who lives across the street from the beach, said she heard two booms late Thursday that were loud enough to shake her house.

“I threw my blanket off, put my slippers on and ran outside thinking it was a car accident,” she said.

She expressed concern for the crew as she watched the pounding surf from Haleiwa.

“I pray to the man upstairs to help them. To bring them home safely,” she said.

The Coast Guard was notified of the crash by a civilian on a beach who saw the aircraft flying then disappear and a fireball. Another person reported a flare in the sky, Coast Guard spokesman Lt. Scott Carr said.

It was not clear if the fireball and the flare were the same, he said.

The Marines were alerted when the helicopters failed to return to their base at Kaneohe Bay as scheduled, Irish said.

The Coast Guard initially reported that the choppers had collided, but Irish said Friday that he did not know if the accident was a collision.

The helicopters normally carry four crew members, but this particular flight also carried one or two instructor trainers, Irish said. He did not know if they were teaching the crew or just observing.

Two Navy ships, the USS John Paul Jones and the USS Gridley, were also participating with a Navy squadron of SH-60 helicopters.

Rough weather was making the search difficult, with winds blowing up to 23 mph and breaking surf up to 30 feet.

“That is moving that debris all over the place,” Carr said. “It makes finding things incredibly difficult.”

“We are now back in the water, and we are searching,” Honolulu Emergency Services Department spokeswoman Shayne Enright said. “We’re very hopeful that we will still find possible survivors out there.”

About two dozen Marines were seen walking up and down the beach at Waimea Bay, a popular surfing spot a few miles from the rescue operation. They appeared to be searching the area. One used binoculars to look out to sea.

The Coast Guard was keeping people out of a wide zone that spanned about 30 miles of shoreline, from Kaena Point to Kahuku Point, citing danger from debris. The zone extended from the shore to 8 miles off the coast.

Ty Hart, a 21-year-old from Oregon, was in one of the helicopters, the Oregonian reported Friday night.

The newspaper said Hart lives on base in Hawaii with his wife.

Hart’s former high school football coach and teacher, Alan Kirby, described Hart as a positive kid who always had a smile on his face and called him a quick learner on the gridiron.

The family of Capt. Kevin Roche believes he was one of the Marines aboard the helicopters.

“We believe the Marines and Coast Guard are doing everything they can to bring Kevin and his fellow Marines home safely, and we are grateful to everyone involved in the rescue,” said a family statement distributed by brother-in-law Anthony Kuenzel in St. Louis.

The crash came less than a year after a Marine Corps tilt-rotor aircraft crashed during a training exercise in Hawaii, killing two Marines. The MV-22 Osprey went down last May with 21 Marines and a Navy corpsman on board.

In 2011, one serviceman was killed and three others injured when a CH-53D Sea Stallion chopper crashed in Kaneohe Bay, Hawaii.