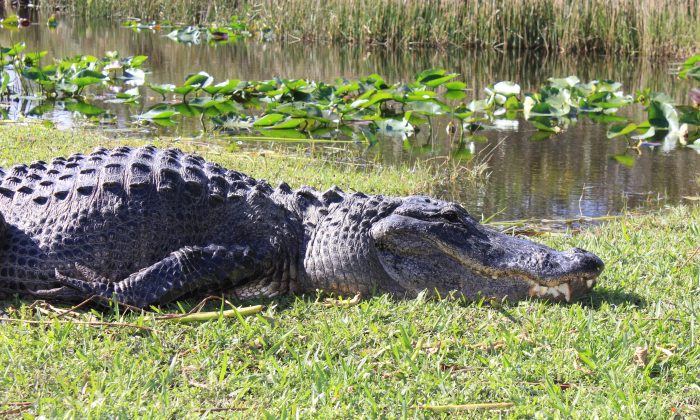 Authorities on Saturday morning were forced to wrangle with a 12-foot-long and 800-pound alligator in a Houston-area shopping center.

Alligator trapper Christy Krobroth told KTRK-TV that the reptile got lost and wandered into a parking lot in Sugar Land, Texas. It was so heavy that authorities were forced to bring in a Home Depot forklift to remove it.

Whitney Morrow, the owner of Whitney Morrow Hairdressing, posted a photo of the gator on Facebook. In the photo, the animals’ legs and mouth are tied with cords. She said the animal is probably 50 years old, based on its size. Some alligators can get to be 100 years old.

Click 2 Houston reported authorities believe the reptile is believed to have come from a creek behind the stores. It was later set free in El Campo, located around 70 miles southwest of Houston.

A Sugar Land police spokesman told MailOnline that police were called in to deal with the animal at around 6 a.m. local time. He said the officers involved in the call had to get a professional wrangler, Kroboth, to help because it was too large.

Another woman who took photos of the reptile, Beatrice Valdez-House, wrote: “You are all now safe from this 50 year old, 800 pound, 12 foot, blind in one eye alligator that has been owning the waterway behind our shop.”

“He was caught this morning in our back parking lot, I think he was trying to get in for a hair appointment. He is now being safely transported to an alligator sanctuary well they’ll take good care of him. The ducks are now rejoicing!”

The Sugar Land gator is almost as large as the biggest alligator ever caught. The so-called Stokes alligator measured at 15 feet and 9 inches and weighed more than 1,000 pounds. A mount of the animal went on display at the Mann Wildlife Learning Museum in Montgomery, Alabama, in May 2015. It was caught in August 2014.

Reptilian biologist Dr. Kent Vliet told AL.com that it might be the oldest living alligator, but he speculated it may have been born large and grew bigger during its lifetime.