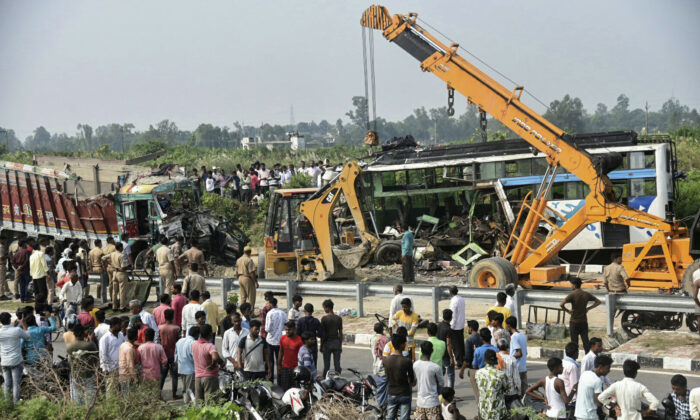 A crane is used to remove the wreckage after a bus collided with a truck in Barabanki district, Uttar Pradesh state, India, on Oct.7, 2021. (AP Photo)
India

12 Dead in India After Bus Swerves to Avoid Stray Cattle

LUCKNOW—Twelve people were killed in northern India on Thursday after the bus they were on swerved off the road and hit a truck, police said.

The bus driver veered off track to avoid hitting stray cattle on the road, authorities said.

The accident occurred in Barabanki district, 40 kilometers (37 miles) southwest of Lucknow city. Another 32 were injured out of the total 60 passengers onboard.

There are fears the number of dead could increase as several passengers received critical injuries, Senior Police Officer Yamuna Prasad said. They were being treated in a hospital.

More than 110,000 people are killed every year in road accidents across India, according to police. Most crashes are blamed on reckless driving, poorly maintained roads and aging vehicles.