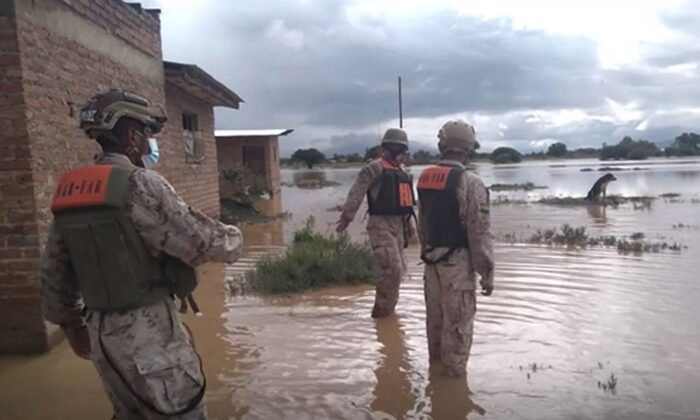 A video photo showing soldiers walking next to flood waters, after the flooding in Bolivia. (AP/Screenshot via The Epoch Times)
International

12 Dead in Bolivia Due to Flooding

Periods of heavy rains throughout the month of December have caused the deaths of at least 12 people and left thousands homeless Thursday.

Local authorities stated the rainfall has set new records nationwide, surpassing the last flooding of this magnitude, which occurred in 2013.

In the central province of Cochabamba, the town of Cliza and the surrounding farmlands were completely flooded, wiping out all crops planted there.

Bolivia’s Air Force sent rescue crews there to help local residents who have lost their homes to the flooding.

Seven of Bolivia’s nine provinces have declared “code orange” alerts due to the rain and the rapid rise in the water level for rivers throughout those areas.

The region’s rainy season is just beginning extending through March.