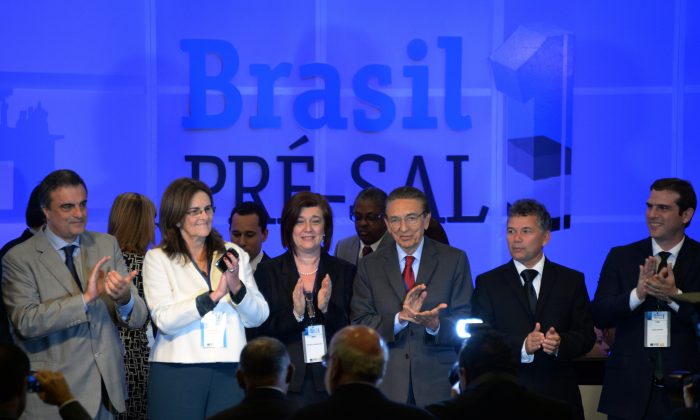 A consortium of five global companies was the winner and sole bidder to Brazil’s huge offshore oil block “Libra,” announced at the auction Monday.

Libra is estimated to hold at least eight to 12 billion barrels of oil, Brazil’s largest find. The consortium is offering 41.65 percent of the surplus oil to the state, the minimum requirement.

Leading the consortium is state-run Petroleo Brasileiro SA (Petrobras), which will hold a 40 percent stake in the field. France’s Total SA and Anglo-Dutch Royal Dutch Shell Plc will each take 20 percent, and China’s CNOOC Ltd and China National Petroleum Corp. will each take 10 percent.

Brazil was originally expecting over 40 companies to bid, and only 11 showed interest in the auction.

Critics of the auction have said the over-regulation by the state was the cause for the low competition, but government officials say the result is a success.

Large energy companies like Exxon Mobil Corp and BP Plc that did now show up had shown interest in previous auctions. Magda Chambriard, head of Brazil’s National Petroleum Agency, said BP had stayed away because of the Gulf of Mexico oil spill, and Exxon traditionally doesn’t invest much in Brazil.

Edison Lobao, Brazil’s Minister of Mines and Energy, said there was “no frustration,” since the government would receive the largest signing bonus ever paid, totaling $6.88 billion (15 billion real).

In addition, the companies (including Petrobras) will have to deliver 41.65 percent of profit-oil to the state. Profit-oil is the part of the field that will be produced after all investments have been paid off. The consortium will invest about $185 billion over 35 years and once this money has been recovered, profit-oil kicks in.

“I don’t think there is any problem with this being won by a single group,” said Delcídio Amaral, a Senator with Brazilian President Dilma Rousseff’s Workers’ Party according to Reuters. “Just when everyone was expecting Libra to be snapped up by the Chinese, Shell and Total show up, two top-quality experienced oil companies.”

Libra is the first field to be sold under the country’s new production-sharing rules. State-run oil company Pre-Sal Petroleo SA (PPSA) will receive the government’s 41.65 percent share of the oil as well as supervise production in Libra.

PPSA will also have some veto power over how the consortium spends the funds needed to develop Libra.

Protesters concerned the government was selling off its riches rallied outside the beach-side hotel where the auction was held. Tear gas and rubber bullets were fired by the 1,100 police outside the hotel.

The National Oil Workers Federation issued a statement after the auction.“Before the auction the country was the 100 percent owner of the biggest oil field yet discovered in the world. Now the Brazilian people are 60 percent poorer.”

Brazil president Dilma Rousseff denied “privatization” in an announcement after the auction.

“From the results of the auction, 85 percent of all profits from the field of Libra will belong to the Brazilian government and Petrobras,” she said.

“This is quite different from privatization,” Rousseff said, adding that the private partners also benefit from profit consistent with the risks and investments made in Brazil.

According to Rousseff, the profits from Libra bring a “small revolution” for Brazil.

“In a decade, Libra alone will represent 67 percent of the current oil production in Brazil,” Rousseff said. She also said 75 percent of the proceeds will fund education.

Peak production for Libra is estimated to be 2.5 million barrels a day, more than double the current production in Brazil.

According to analysts, the Libra field will add 480,000 barrels a day to Petrobras’ current production. The company is struggling to come up with the cash to pay for its $237 billion five-year investment plan on top of the up-front royalty it will have to pay the government for Libra.

But the company has other options too, even though they might have to be delayed.

Cleveland Jones, a geologist at the Brazilian Petroleum Institute at the University of the State of Rio de Janeiro, told Reuters the more attractive oil block is off the coast of Sergie and was discovered by Petrobras and IBV Brasil SA last month.

The oil is higher quality, and the development would help one of Brazil’s poorest regions, Jones said.

“Because of Libra, Sergipe will probably have to wait, and that’s not good for Petrobras, Sergipe or Brazil,” Jones said.