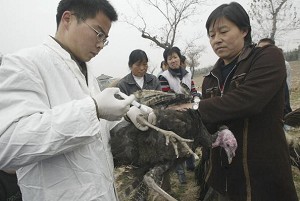 WASHINGTON – On November 10, Chinese authorities announced that 116 people have been quarantined in Liaoning Province. China has not disclosed where these 116 people are being held; however, a village resident was notified by mail that they are forbidden to leave their village.

Bird flu has already taken the lives of 63 people in Asia. China has yet to report any bird flu related deaths. Two villages in Liaoning Province, Fuxin and Jinzhou, have been confirmed to have an outbreak of the fatal H5N1 bird flu virus on Wednesday. This has lead to a new round of slaughter of domestic poultry. Local authorities have also been sterilizing wells and houses in the nearby areas.

On November 9, Wen Jiabao, China’s Premier of the State Council, said that despite the nationwide effort to suppress the spread of bird flu, this disease has yet been contained.

On November 9, the World Heath Organization health experts in Geneva reached a common understanding regarding the bird flu epidemic. The agreement includes the establishment of an epidemic monitoring system, which would help prevent the flu from quickly spreading to the entire human population. The World Bank indicated that it plans to contribute one billion USD toward bird flu prevention project. The World Organization for Animal Health and the Food and Agricultural Organization indicated that five billion USD is required to properly handle the numerous and widespread cases of bird flu in animals.

Three hundred chickens died within four days in four village townships. National laboratories have confirmed that it was caused by the H5N1 virus. Local authorities took immediate action to seal off the area and destroyed two and half million domestic poultry.

Other areas where the bird flu has been reported lately are: 18 villages and townships of Heishan County, Chaoyang Temple Village of Fuxin City, and Daling village of Jinzhou City.