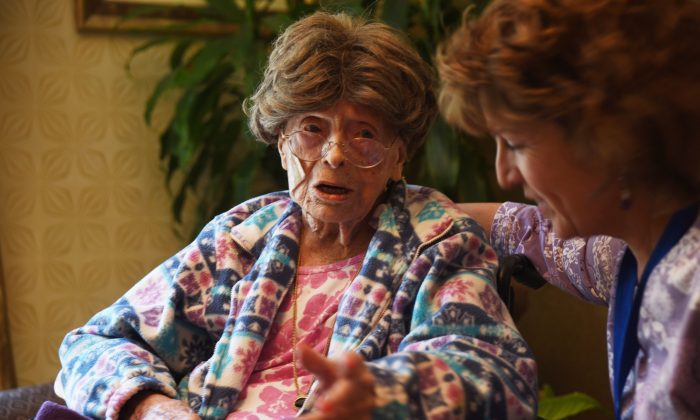 In this July 19, 2016, photo, Adele Dunlap, 113, talks with Susan Dempster, the Activities Director at Country Arch Care Center in Pittstown, N.J. (Chris Pedota/The Record of Bergen County via AP)
US

PITTSTOWN, N.J. —A 113-year-old New Jersey woman is the new holder of the title of oldest American.

She also is the 10th oldest person in the world, according to the Los Angeles-based Gerontology Research Group, which tracks supercentenarians, people 110 or older.

Dunlap lives at the Country Arch Care Center in Pittstown, where she first arrived at age 99 ½. Asked how it feels to be the oldest American, she told the newspaper: “I don’t feel any different.” Asked what it means to be an American, she said: “Well, I’ve never been anything else.”

Dunlap taught school before marrying and settling down to raise the couple’s three children. Her husband worked for an insurance company and died in 1963.

She doesn’t give an explanation for her longevity, and her 86-year-old son, Earl, is also at a loss to credit any particular thing for his mother’s long life.

“It’s hard to say,” Earl Dunlap said. “She never went out jogging or anything like that. She’s not really thin, but she never weighed more than 140 pounds. She smoked, and when my father had his first heart attack, they both stopped. I think she ate anything she wanted.”

Despite the fact she was born Dec. 12, 1902, in Newark, she often gives a younger age when asked how old she is.

“Last year, when we were telling her it was her 113th birthday, she said, ‘No, no, no, I’m only 102,'” recalled Susan Dempster, the care center’s activities director.