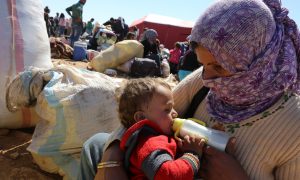 It has been seven years since the United States opened its borders to tens of thousands of Iraqi refugees. And they keep coming. Last year, over 20,000 crossed the border—a record number. More than 1,500 more have come so far in 2015, as of Jan. 31, foretelling another high year. So where are they settling?

Since the Iraq War started in 2003, some 2 million people fled the country, according to the United Nations High Commissioner for Refugees.

For years, the United States only accepted a handful of refugees, fomenting criticism.

In 2007, U.S. ambassador to Baghdad, Ryan Crocker, called on President George W. Bush to guarantee save haven to all the Iraqis who aided the United States during the war, possibly tens of thousands. They were facing violent threats in the unstable country, Crocker said, according to Washington Post.

Related Coverage
110,000 Iraqi Refugees in US, Where Are They?

California is the biggest host state for refugees. Out of some 600,000 refugees that have come to the country in the past decade, more than 65,000 went to California—over two thirds of them were from Iraq and Iran.

El Cajon, a town of 100,000 on the outskirt of San Diego, accepted over 9,000 of the Iraqi refugees. One of its main streets is even dubbed “Little Baghdad,” according to The Progressive.

Iraqis in Michigan make up two thirds of all the refugees in the state.

Texas, on the other hand, hosts over 56,000 refugees, but majority are from Burma, Bhutan, and Somalia.

More than one in five Iraqi refugees came with college education and over a quarter of them are children under 14, according to the Department of State data. Almost a third of them are Christians, most of others are Muslims.