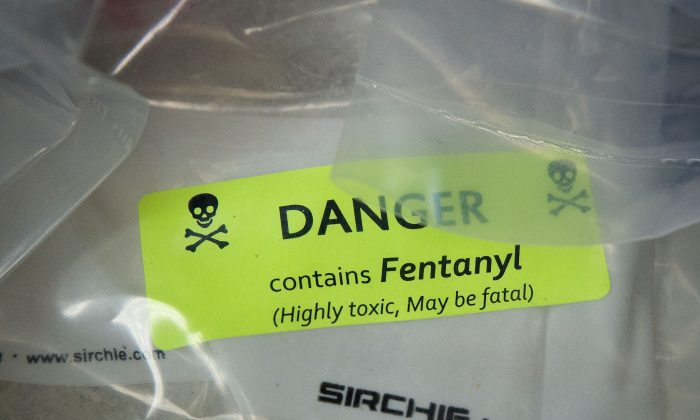 Bags of heroin, laced with fentanyl, at the office of the New York attorney general in New York on Sept. 23, 2016. (Drew Angerer/Getty Images)
US-China Relations

110 Pounds of Fentanyl From China Seized at Philadelphia Port

Fifty bags of the deadly synthetic opioid were found in a shipment of barrels containing iron oxide and had an estimated street value of $1.7 million, according to a press release by the U.S. Customs and Border Protection (CBP) on June 28. The bags were first detected by customs officers using a narcotics dog.

Fentanyl, a synthetic opioid about 50 times stronger than heroin, is at the center of the opioid epidemic in the United States. It is often mixed with other drugs without the user’s knowledge.

“Opioids, including fentanyl and its analogues, are a serious public health concern, and the importation of vast amounts of this deadly synthetic chemical compound is a national security threat,” said Casey Durst, CBP director of field operations in Baltimore, in the press release.

Much of the drugs flowing into the United States originate in China or are made from precursor chemicals manufactured in China.

Overdosing from synthetic opioids led to more than 20,000 deaths in 2016, according to the Centers for Disease Control and Prevention.

A February report by Reuters found that fentanyl shipments from China were entering the United States through the postal service. Oftentimes, drugs were mailed from “labs” in China to individuals who ordered them online, for their own consumption or for middlemen who dilute them for resale.

A U.S. Senate subcommittee investigation found that the U.S. Postal Service failed to widely deploy a system to capture advanced electronic data (AED) about packages destined for American ports, which would have helped identify suspicious mail to be turned over to U.S. customs agents.

Customs officials are reporting an uptick in fentanyl seizures. In 2016, the first year CBP started tracking fentanyl seizures, officers seized 440 pounds nationally. By 2017, that number grew to 951 pounds. From the beginning of this year to the end of April, 984 pounds have been seized already.