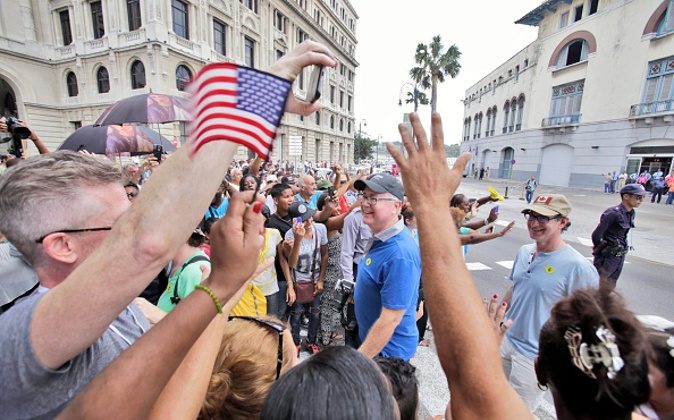 HAVANA, CUBA - MAY 2: American passengers are being welcomed by Cubans upon arriving in Cuba aboard the cruise ship Adonia, the first US cruise ship in nearly forty years to arrive in Cuba, on May 2, 2016, in Havana, Cuba. The Adonia, belonging to the Carnival group, carried some 700 passengers on its sail from Miami to Havana, officially re-establishing the US cruise business in Cuba.(Photo by Sven Creutzmann/Mambo photo/Getty Images)
Aviation News

As the United States continues to cultivate closer relations with Cuba following a decades-long rift, scheduled commercial flights to Cuban cities (other than capital city Havana), have been approved. The U.S. Department of Transportation released a statement June 10.

Originally, only charter flights to the island-nation had been allowed.

Flights to Cuba will be available from Miami, Fort Lauderdale, Chicago, Philadelphia, and Minneapolis/St.Paul. The six domestic airlines selected to carry out the trips are American Airlines, Frontier Airlines, JetBlue, Silver Airways, Southwest Airlines, and Sun Country Airlines. Flights could be available as early as this fall.

The initial decision was reached on Feb. 16, 2016, when U.S. Transportation Secretary Anthony Fox, among other federal employees, signed an arrangement promising to restore air services between the two countries.

“Last year, President Obama announced that it was time to ‘begin a new journey’ with the Cuban people,” said Foxx. “Today, we are delivering on his promise by re-launching scheduled air service to Cuba after more than half a century.”

A decision regarding which airlines will get the limited Havana trips will be made later this summer.

The announcement comes a month after the first American cruise ship arrived in Cuba for the first time in nearly 40 years.