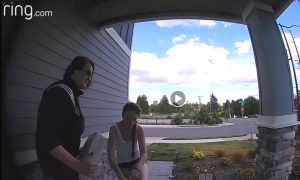 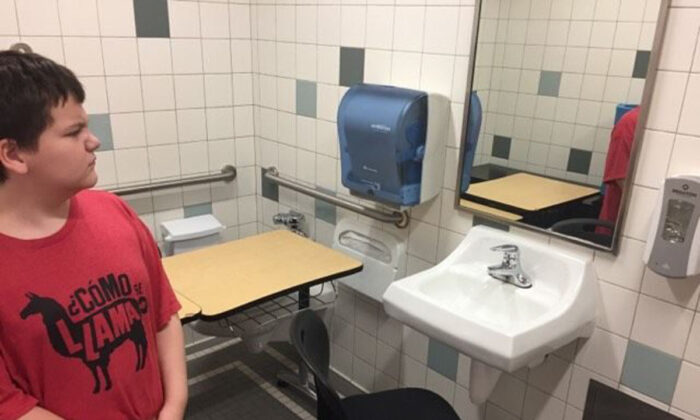 An 11-year-old special needs student in Washington State had his new quiet learning space set up inside a bathroom, sparking parental outrage.

Lucas Goodwin, who is autistic and has an autoimmune disorder, is seen in the photo his mother shared on social media, as he stands in front of his desk inside what she said is a functioning bathroom.

“I was stunned,” said the boy’s mother, Danielle Goodwin, KOMO reports. “I was so shocked I just took the picture because I didn’t believe what I was seeing.”

Goodwin and her son were more than disappointed when they arrived at the Bellingham school on Monday, Sept. 16, to find how the school had accommodated the boy who suffers from a condition called PANDAS (Pediatric Autoimmune Neuropsychiatric Disorders Associated with Streptococcal Infections), which means being around germs is a hazard.

“My son has special needs and does best in a very quiet place,” Goodwin said.  She said she asked his teacher if he could work in the library and she said no. “She also said it was fine for him to be in there because they ‘don’t use it as a bathroom.'”

Goodwin called the suggestion that her son work in a bathroom as “inhumane.”

“My son was humiliated, embarrassed, and disgusted,” she said.

“I was like how is this happening? How am I in the bathroom? Why?,” Lucas said, according to KOMO, reacting to the prospect of doing schoolwork on a desk perched over a toilet bowl.

His mother said her son was also given a camping mat so he could lie down for a rest on the bathroom floor.

“It’s not an appropriate place for anyone, but especially for Lucas with his PANDAS condition, he can’t be around germs. That’s something that can really affect his body,” Goodwin said. “It smelled and just the thought of my son working his school day away in a bathroom was disturbing to me.”

Goodwin said she took my son home from the school “and he will not be returning. When we got home he was throwing up from the anxiety.”

Lucas was cited by KOMO as saying he doesn’t want to go back to the school.

School Superintendent Greg Baker addressed the matter in a statement, saying that the idea was well-intentioned but missed its mark and was abandoned.

“We are always looking for creative ways to best use our facilities to meet students’ needs. For example, throughout the years in order to provide full-time kindergarten we have sometimes converted staff lounges into temporary classrooms and principals’ offices into meeting spaces.”

“This current situation is an example of staff trying to seek a solution to temporarily repurpose a room. To our knowledge, the room had been used as storage, not as an active restroom. “It didn’t turn out to be an idea that was used; no students spent time in the repurposed space as part of their school day.

“Again, my preliminary assessment is this idea was well-intentioned, but in the end we did not move forward with it.”

Baker praised school staff as “incredibly skilled, compassionate and dedicated,” but acknowledged that “like all of us, including myself, our staff are not perfect. Together we show who we are in situations like this: we take responsibility, we learn and we commit to doing better.”

One commenter said, “I’m so sorry this happened. It was a bad idea but maybe she meant well!”

Another commenter said she was “very saddened to hear this. The greater ‘salt in the wound’ is hearing the Superintendent’s reply….”The bathroom is often used for storage, and we are always looking for creative ways for our teachers to educate our children..” I am so sorry for the anxiety this has caused your son. It is a disgrace for this to be occurring in our modern day educational system.”

“This is disgraceful. I have worked with children that have medical problems and I would never ever stand by and watch any child be treated like this,” another commenter said.