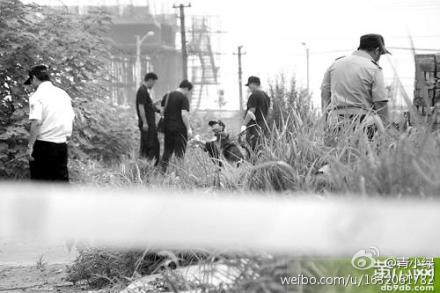 Police search for the body of a missing 7-year-old girl who was killed by a slightly older friend, because they had constant run-ins. The incident provoked reflection on the Internet. (Weibo.com)
China

An 11-year-old Chinese girl in southern China’s Guangdong province has admitted to killing a 7-year-old girl playmate living next door due to constant run-ins.

The 7-year-old victim Xiaoting and her grandmother are residents of Guangkeng Township, Dongguan City in Guangdong Province. The grandmother reported to the local police of the girl’s disappearance at around 9 p.m. on Sept. 29, according to a report by Southern Metropolis Daily.

The grandma said Xiaoting told her she was going to visit a nearby relative’s home at around 8 p.m. on Sept. 29. But surveillance video showed that she disappeared around 9 p.m. after playing with the next door neighbour’s children near a pond just 100 meters from her home, the report said.

Police said they found Xiaoting’s body in a small pond in a vegetable garden in the township.

Police also said they have arrested the 11-year-old girl who lives next door. The girl admitted to killing Xiaoting, saying that they had frequent disagreements while playing together, according to statements released by police.

Xiating’s uncle told Metropolis that the 11-year-girl’s family of four, including her parents and a brother, has moved to next door to Xiaoting’s home for two months.

The grandma said she had told Xiaoting to not play with the kids next door after learning that they constantly bullied Xiaoting. “One time they forced her head into a barrel of water, and she had to go to a hospital for a treatment,” she told Southern Metropolis Daily.

The incident provoked outrage and reflection among Chinese netizens.

“As we hold the murderer and her guardian accountable for the crime, shouldn’t our society reflect deeply what is the social cause of this crime,” one netizen wrote.

“It looks like hatred has invaded our nation’s genes. What we heard most often since we were kids is class hatred, national hatred, and avenging hatred. Our education lacks the elements of forgiveness and tolerance. If we go on like this, we will become our own enemy,” wrote another netizen.