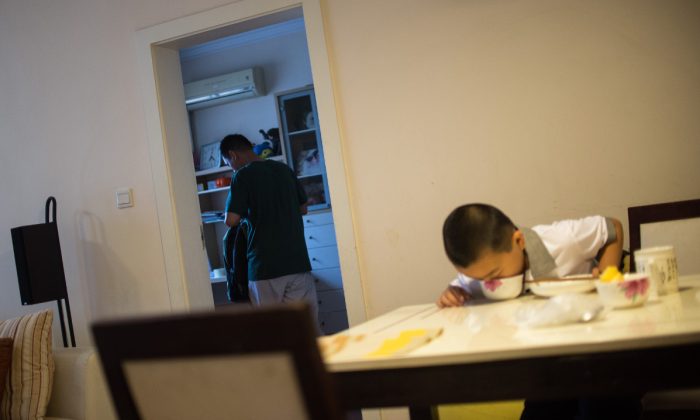 A boy eating with his father in the background. (Johannes Eisele/AFP/Getty Images)
Social Issues

An 11-year-old boy has taken up a mission to save his father’s life in an unexpected way—by eating as much as he possibly can. The father is in need of a bone marrow transplant, and the hospitals will only do it if the donor is a certain weight, according to major Chinese online-news media Pear Videos.

Lu Zikuan, the eldest son in the family, from Xinxiang City in Henan Province, China, is now gaining weight as quickly as possible to reach the donor’s weight requirements.

The June 4 report by Pear Videos said that Lu is just a few pounds away from reaching the Chinese weight minimum.

The United States does not have a minimum weight requirement, but rather a maximum weight limit and minimum age requirement for marrow donors.

Binge to Save a Life

Preleukemia is a rare disease that results from blood cells that are not formed properly, caused by “something amiss in the spongy material inside your bones where blood cells are made (bone marrow),” according to the Mayo Clinic.

“The doctor recommended that the best thing is a bone marrow transplant,” Lu’s mother told Pear Videos. “But because of financial limitations, we decided to just take medicine for the time being.”

However, the medicine’s effect could not last forever, and Lu’s mother said that in August 2018, his disease got progressively worse.

“Right now, the only option is to do a bone marrow transplant.”

Lu is the only one in his family who has a matching type of bone marrow with his father, according to Pear News. However, marrow donors must be over 99 lbs (45 kg), while Lu is only 66 lbs (30 kg).

“Now just to make sure our eldest son gains weight, our whole family makes sure he eats all the meat and delicious food,” Lu’s mother told Pear Videos. “His little brother and sister really want to eat that too, but they understand.”

Lu eats five meals a day, according to Pear Videos. After two months of eating at this rate, he now weighs 97 lbs (44 kg).

Lu’s mother said that the medical expenses are hard to bear for an ordinary family, and they can’t begin to calculate how much they’ll pay.