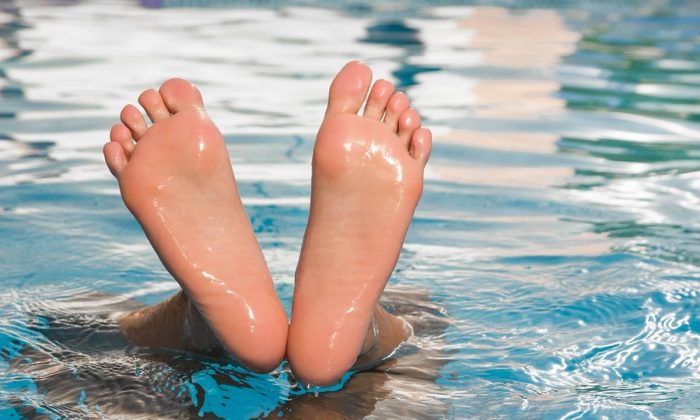 Stock image of feet in a pool. (jackmac34/Pixabay)
Crime and Incidents

An 11-year-old autistic boy was reported missing on June 29 and was soon found unconscious in a neighbor’s pool in Florence, Kentucky, according to police reports.

Mamadou Ba of Rose Petal Drive left his home without anyone noticing, and after 20 minutes his family realized he was missing and called 911, according a statement by the Boone County Sheriff’s Office.

“When deputies arrived on scene it was learned that Mamadou’s family went to a neighbor’s residence which had a pool enclosed by fence in their backyard and requested that the neighbor check their backyard and around the pool in hopes of locating him,” said the release.

Mamadou was found submerged in the water. “The neighbor jumped off of the deck and retrieved an unconscious Madou from the pool and immediately began CPR,” said the Sheriff’s office.

The boy had scaled a shared fence with the neighbors to get into their backyard before entering the pool.

“Mamadou died shortly after arriving at the emergency room. Early indications suggest that this is nothing more than a tragic accident. Investigators learned that Mamadou was drawn to water and that Mamadou had taken his shirt off prior entering his neighbor’s backyard,” said the Sheriff’s office.

In a similar incident, a 15-year-old boy with autism who went missing in Georgia was found dead in a small pond 300 feet from his home, the Pike County Sheriff said on May 9.

Ephraim Moisey Burgreen went missing from Madden Bridge road in Molena on May 8 at about 5 p.m., and 100 volunteers joined the search for him, including his mother. The investigators said no foul play was suspected to be involved, reported 11 Alive.

Pike County officials launched the extensive search that included a sheriff’s office drone and the Spalding County Sheriff’s Office helicopter, according to PikeCountyGeorgia.com

Officers on horseback also searched the area for him, but the teen was not found until 10:49 p.m., after two dogs trained by the army were sent to look for him.

The dogs finally led the police to the small pond that’s only waist deep. Pike County Fire Chief Rick O’Barr told 11 Alive that Ephraim liked to play at the pond.

“We sent a team to see if we could get a boat into the pond and while looking for a way to get in, discovered his body in the middle of the pond,” said Pike County Fire Department public information officer Anita Neath, according to PikeCountyGeorgia.com

Risk of Injury to Autistic People

Children with autism are 40 times more likely to die from injury, according to a study published in the American Journal of Public Health (AJPH).

The study found that people with Autism Spectrum Disorder (ASD) face challenges with social skills and communication and die at the average age of 36.

The National Autism Association reports that wandering from a safe environment is a leading risk for autistic children, and drowning is among the leading causes of death among people with autism.

“In 2009, 2010, and 2011, accidental drowning accounted for 91% total U.S. deaths reported in children with an ASD ages 14 and younger subsequent to wandering,” the Association stated on its website.

It reported that children with ASD tend to wander at a rate four times higher than unaffected siblings.

“First, the prevalence of autism has been increasing,” Li said, according to CNN.

Li said an estimated 3.5 million people with autism live in the US, including about 500,000 children under the age of 15.