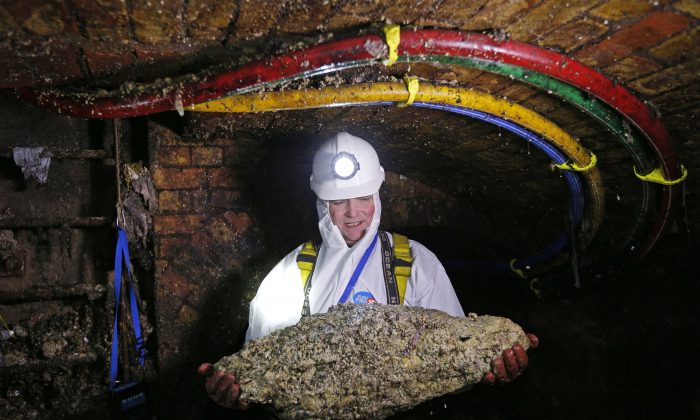 The word “fatberg” probably shouldn’t exist in the first place, but what it refers to is a congealed lump of fat, sanitary items, and wet wipes found in city sewer systems. But an 11-ton fatberg destroyed a sewer pipe in west London on Tuesday, according to local reports. It was later removed.

So, what causes a fatberg? When people dump cooking oil or fats down the drain or flush solid trash like wet wipes down the toilet (instead of throwing them in the garbage). The fats then solidify at room temperature and form solid, plastic-laden masses in sewage systems.

London officials think the problem is getting worse because people flush wet wipes down the toilet.

“Wet wipes are particularly nasty when people flush them down the toilets,” a spokesman for the utility company Thames Water was quoted by the Independent newspaper on Tuesday.

“When all these things come together in our sewers, wet wipes stick to fat and anything that is flushed down toilets that shouldn’t be, like nappies and sanitary items.”

Stephen Hunt, a supervisor for the company, is overseeing the removal of the fatberg.

@FranOSullivan the #TPP is to trade as this 10 ton fatberg is to cake making http://t.co/gLir00XfUN

“We see blockages all the time on household sewer pipes, which are about big enough for a cricket ball to pass through, but to have this much damage on a sewer almost a metre in diameter is mind-boggling,” he said, reported The Guardian.

“The original sewer has been so badly abused by fat being chucked down the plughole we’ve had to opt for the time-consuming and disruptive option of replacing many metres of pipe.”