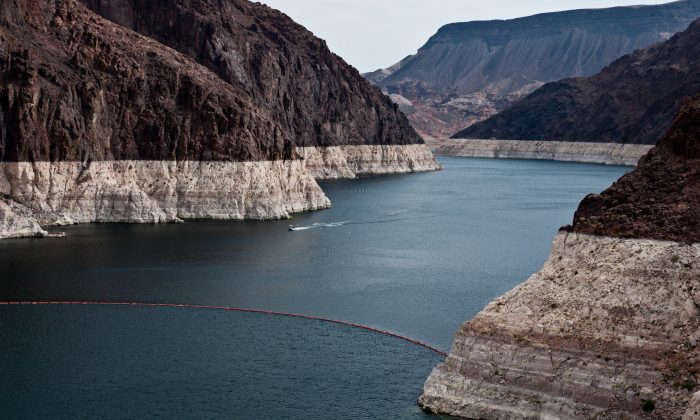 A recent photo of Lake Mead shows white rings caused by declining reservoir levels during the drought. (U.S. Bureau of Reclamation)
US

LOS ANGELES—Western states, facing fourteen of the driest years in the last century, are looking for ways to conserve water in Colorado River reservoirs, which supply almost 40 million people in seven states. Municipal water providers from four western states and the Department of the Interior (DOI) announced an $11 million plan Thursday to fund water conservation projects for the Colorado River Basin.

“This situation is becoming increasingly critical. We are already dealing with unprecedented pressure on the southern California region’s water system,” said Jeffrey Kightlinger, general manager for The Metropolitan Water District of Southern California in a statement.

The impact of the drought has been visible—the Colorado River Basin’s reservoirs are just over half of their capacity—but the extent of the depletion was only recently measured.

On July 24, the journal Geophysical Research Letter published online a nine-year study by six researchers from the University of California, Irvine, NASA, and National Center for Atmospheric Research.

The scientists found that over three quarters of water lost in the Colorado River Basin from December 2004 to November 2013 was from groundwater. Unlike surface water, ground water is harder to see, and takes a lot longer to replenish.

The total loss of groundwater would fill almost two Lake Meads, or about 20 million Olympic sized swimming pools, according to UC Irvine Hydrologist Stephanie Castle, who co-authored the report. That amount of water would provide water for 50 million households for a year.

“The magnitude of the amount of water that was depleted during this time period did shock us,” she said. “We weren’t expecting that we depleted nearly two of our largest reservoirs underground.”

Castle visited the capital on Tuesday to discuss the study with representatives from the DOI, the Environmental Protection Agency (EPA), and the Council on Environmental Quality.

Arizona, California, Nevada and Colorado signed an agreement with the DOI called the Colorado River System Conservation program to fund water conservation projects in 2015 and 2016. The planned projects would provide incentives and compensation for reduction in water use by cities, farmers, and industries in the four states.

The DOI said the water conserved by the programs would stay in the Colorado River and boost declining reservoir levels. However it does not specifically mention efforts to reduce groundwater loss.

“Typically, during drought, groundwater use is increased when surface water is decreased,” said Castle. “But we’re not managing it the same way as we are our reservoirs, and groundwater is a lot less resilient type of resource.”

Castle says they don’t know exactly how much water is left, since their satellites can only show changes over time, not total amounts. Without better management of water resources and more rain, the Colorado River Basin could face even lower water levels in the coming years.