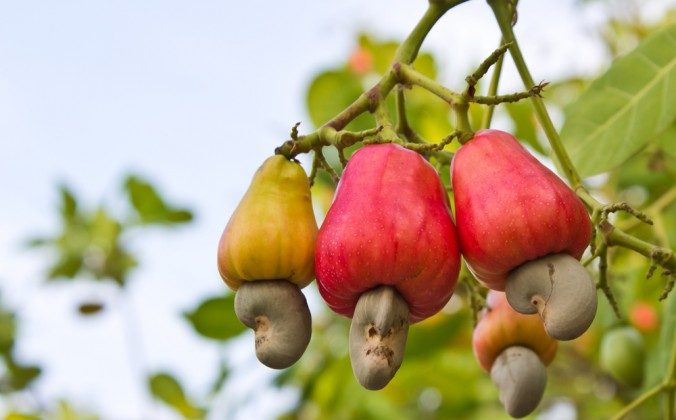 How often do you pause to consider how the food on your table actually grows from the ground: What kind of plant does it come from, and how is it processed? Some of the most common foods are also some of the most remarkable. Chocolate, cashews, pepper corn, baby corn, cinnamon, wasabi, pineapple, kiwi, sesame seeds, saffron, asparagus. Do you know how they grow?

Why are cashews one of the more expensive nuts you can buy? It’s because each cashew is actually the single seed of a mango-sized fruit called the cashew apple. The seed hangs from the bottom of the inverted heart-shaped fruit. Cashews are complicated to process because what we eat as the nut is encased in two layers of shell—which happen to contain a toxic oil similar to the toxin in poison ivy. So to get at the edible part of the nut, the whole thing must first be roasted to destroy the toxin.

The cashew apple meanwhile is delicate and sweet with a tangy aftertaste. It’s also high in tannins, which leaves that dry feeling in your mouth (like eating an underripe banana). In places like Brazil, the fruit is very popular and eaten fresh or used to make juice, syrup, wine, and glazed fruit. In some Latin American countries, the fruit is so prized that the troublesome nuts are thrown away. However, the fruit is also highly perishable so in other countries, like Thailand, cashew nuts are the big export product and the troublesome, odd-tasting fruit is usually discarded.

Baby corn is not a miniature variety of corn as some people think. It’s actually regular corn that is picked before it’s pollinated so it never matures. Any variety of corn can be harvested as baby corn. Sometimes it’s a primary crop, meaning it’s planted to produce baby corn; or it can be a secondary crop grown as regular sweet corn, with some being picked early. In either case, the corn stalk must still grow to about 6 feet before it’s harvested (making it a less than ideal choice for window-box gardening).

Cinnamon is the inner bark of the semi-tropical Cinnamomun zeylancium, or Ceylon cinnamon tree, native to Sri Lanka. This is known as “true” cinnamon. It is often confused with cassia, also called Chinese or Vietnamese cinnamon, which is actually the dominant type used in commercial production today. So most of the cinnamon we buy isn’t in fact true cinnamon.

True cinnamon is more aromatic than cassia and has a less assertive flavor. The leaves of both plants are also fragrant, and are often used to flavor cinnamon tea.

Cinnamon trees can grow to roughly 50 feet, but are usually kept to under 8 feet under cultivation. The branches are cut to produce the spice. After the branches are harvested, the farmer must keep them moist for 1-2 days to make the bark easier to separate. Then the leaves and twigs are removed and the outer bark is scraped off. The precious inner bark is then carefully removed off by slicing underneath it in long parallel cuts. This is what results in the characteristic cinnamon curl. Long curls of bark are layered together in bundles creating the familiar cinnamon stick. After the long sticks are dried, they are cut down into a convenient, commercial length of a few inches.

Chocolate is made from the dried, fermented beans that grow inside the fruit of the cocoa tree. The football-sized pods grow directly out from the tree’s trunk or on large branches. Inside the pods, the seeds are surrounded by a light-colored, pulp that is tasty and sweet, but tastes nothing like chocolate. There are roughly 30-50 seeds in each pod.

The seeds start out white or light lavender then turn darker as they dry and ferment. The beans are further dried in an oven then crushed in a mill to remove the papery skin leaving behind cacao nibs, which is the purest form of cacao. It’s processed from there into the many different forms we buy as chocolate.

Wasabi is a root that grows in cool, moist, mountainous areas or under a forest canopy in nature. Under cultivation, it is grown in heavy shade in shallow, cold running water. It can take 3 years for the plant to reach maturity. Because wasabi is rather difficult and expensive to grow, much of the so-called wasabi on the market today is fake—it’s actually a mixture of regular horseradish, mustard, and food coloring.

Fresh grated wasabi naturally forms a creamy paste and is an essential ingredient for sushi. It also loses its flavor very quickly after grating if left uncovered. Wasabi leaves can also be eaten and share the same spicy flavor as the root.

In Japan, sawa wasabi is most expensive because it is grown naturally. Wasabi is cultivated in Japan, parts of China, Taiwan, Korea, New Zealand, and some success has been had in the rain forests on the Oregon Coast and parts of the Blue Ridge Mountains in North Carolina and Tennessee.