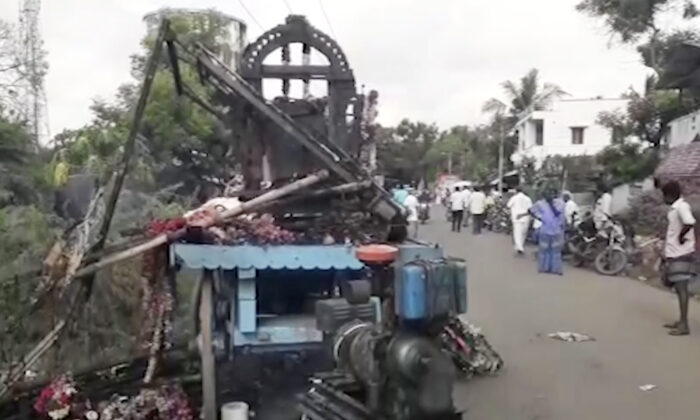 A truck, decorated as a chariot, after an accidental electric shock in Thanjavur district, in the southern Indian state of Tamil Nadu, on April 27, 2022. (KK Productions via AP)
Asia & Pacific

NEW DELHI—Eleven people were electrocuted when their truck, decorated as a temple chariot, touched an overhead power line during a Hindu festival procession in southern India on Wednesday, police said.

The New Delhi Television channel said the electrical spark also set fire to the truck, which was crowded with devotees.

The 11 people died and three others suffered burns and were hospitalized in Thanjavur, a city in Tamil Nadu state, a police officer said on condition of anonymity because he was not authorized to speak to the media.

The temple chariot procession in Thanjavur, 340 kilometers (210 miles) south of Chennai, the state capital, was organized by a local Hindu temple. Other details were not immediately available.

Thanjavur is an important center of South Indian religion, art, and architecture. The area is known for its old temples.