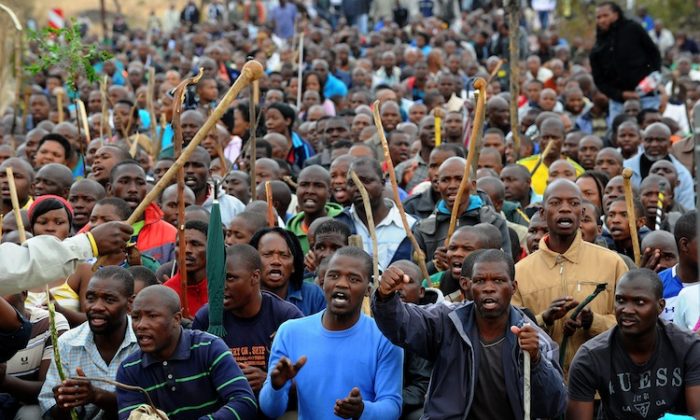 Thousands of striking workers singing and carrying sticks march on a South African mine in Marikana on Sept. 5. Police were accused of shooting miners in cold blood during a crackdown that killed 34. (Alexander Joe/AFP/Getty Images)
Africa

A South African court Thursday freed more than 100 mine workers who were being held over the deaths of their colleagues in mid-August.

The miners were charged last week, along with around 170 others, under a little-used law that said their actions forced police to shoot and kill 34 striking workers at the Marikana platinum mine. The charges were widely panned by opposition lawmakers and others.

The 102 who were freed Thursday are the second group of miners to be released, reported the South African Press Association (SAPA). The other 162 men were released Monday.

“Charges of murder and attempted murder against you have been withdrawn and you are being released on warning,” Esau Bodigelo, the local magistrate, told the miners, according to SAPA.

The case related to the “remaining charges has been postponed,” he said, adding that the workers “will appear in this court next year” in February.

The men were charged under the common purpose law, which has been rarely used and dates back to the apartheid era.

As the miners were freed, more workers gathered at the Marikana, owned by Lonmin, and said they would continue to strike for a wage increase, SAPA reported.

“A peace accord will not help us workers in any way. We are not party to that,” miner representative Zolisa Bodlwana was quoted as saying.

Workers have been on strike for more than three weeks over wages.