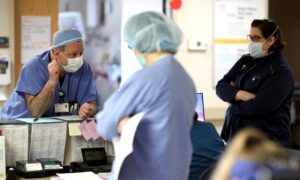 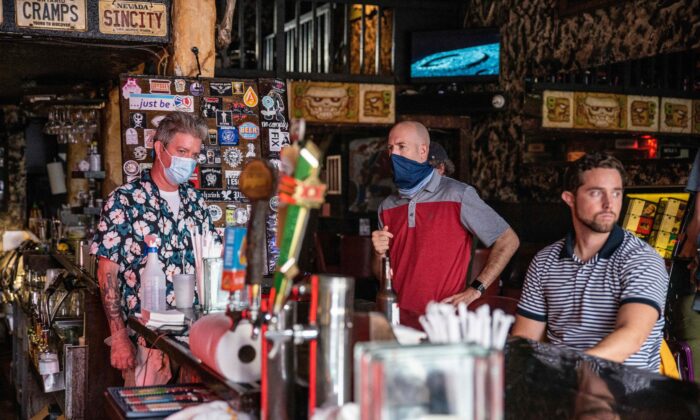 People sit at the bar of a restaurant in Austin, Texas, on June 26, 2020. (Sergio Flores/AFP via Getty Images)
Business

A trade group representing about a million of America’s restaurants is calling on lawmakers to help the nation’s ailing eateries after it said nearly 100,000 restaurants were shuttered recently amid pandemic-driven reopening rollbacks.

The National Restaurant Association, the world’s largest food service trade association, on July 15 sent a letter to Congress along with a “Blueprint for Restaurant Revival” (pdf), urging a range of relief measures and estimating that the nation’s restaurants are on track to lose $240 billion in revenue this year.

“In just the past two weeks, state and local government mandates have shut down almost 100,000 restaurants,” said Sean Kennedy, executive vice president of public affairs for the association, in the letter (pdf).

“As of today, the industry has lost over $120 billion and the current revenue path aligns with our year-end loss projections.”

As COVID-19 infections and hospitalizations have surged in states ranging from Arizona and California to Florida and Texas, many local governments have reversed course on reopening plans.

“Many are advising us they cannot survive this ongoing on/off approach to operations and will permanently close,” Kennedy wrote.

The restaurant industry has been particularly hard-hit by the outbreak. About a quarter of the approximately 20 million jobs lost in April were in the restaurant industry. The most recent nonfarm payroll Labor Department figures (pdf) show that while employment in food services and drinking places recovered by 1.5 million in May and by the same amount in June, it is still down by 3.1 million since February.

“Despite losing more jobs and revenue than any other industry in this country, Congress has chosen not to advance a recovery package that is tailored for the unique challenges of a restaurant on the cusp of bankruptcy,” Kennedy noted in a statement.

The association’s plan calls for short-term relief and long-term foundation-building to help restaurants survive the shifting policy landscape amid the COVID-19 surge.

The Blueprint for Restaurant Revival calls on lawmakers to implement a range of measures, including short-term relief, by creating a targeted Restaurant Recovery Fund.

“Given the evolving reopening ‘start again, stop again’ landscape, the urgency for this recovery solution grows daily,” the association writes in the plan.

The blueprint also urges lawmakers to deploy another round of funding under the Paycheck Protection Program, or PPP.

“The initial PPP provided eight weeks of vital short-term relief, but the challenges facing our industry have not gone away and restaurants have exhausted their PPP loans,” the association writes.

Other measures include liability protections and payroll tax relief.

“The restaurant industry is one of tenacity, innovation, and dedication to serving our community,” Kennedy stated. “We are looking to Congress not only for support for our short-term survival, but to create a long-term framework that sustains our role as a key part of the food supply chain for the millions of families that rely on us for nourishment.”