100,000 Hospital Beds to be Added in Hubei, China, Ground Zero of Coronavirus Outbreak 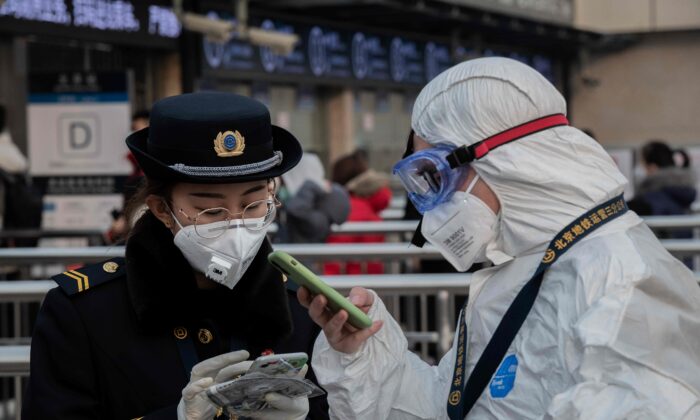 A security personnel wearing protective clothing to help stop the spread of a deadly virus that began in Wuhan, talks with a subway staff (L) wearing a mask at a subway station entrance in Beijing on Jan. 27, 2020. (Nicolas Asfouri/AFP via Getty Images)
By Eva Fu

The epicenter of the coronavirus outbreak, China’s Hubei Province, is opening up 100,000 hospital beds in an effort to contain the disease, the province’s vice governor announced on Jan. 27.

At least 17 cities in the province have been placed under a lockdown, stranding tens of millions of people amid the Chinese New Year holiday, the country’s peak migration season.

Thousands have been infected with the deadly virus.

In a press conference on Jan. 27 evening, Hubei vice governor Yang Yunyan said authorities have designated 112 medical institutions to treat patients with the deadly novel coronavirus, according to Chinese state media. They have freed up around 100,000 hospital beds in the province, with 3,000 of them in Wuhan city alone, where the disease first broke out.

The urgency and scale of the authorities’ orders have raised fears that the outbreak has spread far more widely than authorities admit.

Another 24 medical centers will be mobilized to assist with patients who exhibit symptoms and are suspected to have the virus. More doctors and health workers have arrived in Hubei in order to relieve the exhaustion of frontline medical staff, Yang said.

Authorities have extended the national New Year holiday by another three days to Feb. 2, in order to prevent large crowds from gathering, which could lead to more infections, according to a statement by the cabinet-like State Council. All schools in China, from kindergarten to college level, will have their spring terms pushed back indefinitely until further notice.

So far, all provinces and regions except Tibet has reported infections.

The country’s vice premier Li Keqiang arrived in Wuhan on Monday to coordinate efforts to contain the disease, as the Chinese regime came under growing pressure. The event, marking the first visit from senior Chinese Communist Party officials to the city since the outbreak began, came two days after Chinese leader Xi Jinping set up a “central leading team” to handle the situation. Li had been named head of the group.

Xi has called the outbreak a “grave situation.”

According to Wang Jiangping, vice director of China’s Ministry of Industry and Information Technology, hospitals in Hubei need 100,000 protective suits daily, but there are only about 40 such suppliers nationwide, with a total production capacity of 30,000.

“There’s a very acute conflict between supply and demand,” he said, adding that medical workers are also in urgent need for other supplies such as surgical masks.