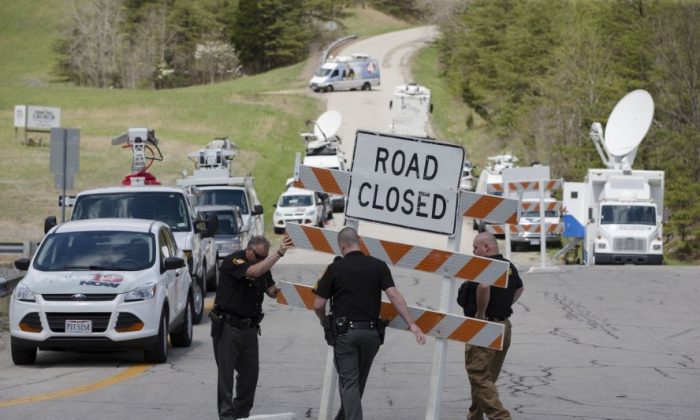 In this April 22, 2016, file photo, authorities set up roadblocks at the perimeter of one of four properties near Piketon, Ohio, where seven adults and a 16-year-old boy from the Rhoden family were found shot to death. (AP Photo/John Minchillo, File)
News

COLUMBUS, Ohio –  An Ohio group is offering a $10,000 reward for information leading to the arrest and conviction of whoever’s responsible for killing eight relatives three months ago.

The reward offer was approved by the Southern Ohio Crime Stoppers’ board in May but hasn’t been publicized much, and state investigators weren’t aware of it.

Seven adults and a 16-year-old boy from the Rhoden family were found dead April 22 at four properties near Piketon. Authorities have refused to discuss details, possible suspects or motives, saying they don’t want to jeopardize the investigation.

A Crime Stoppers liaison says a voicemail was left to notify the Pike County sheriff’s office about the reward, and the information apparently got lost in the shuffle somehow.

A message seeking comment was left Thursday with the sheriff’s office.

“I think people would be absolutely amazed that with just a little bit of money, how much more information can come in,” Pike County Sheriff Charles Reader said, according to the Columbus Dispatch. “This is something we’ve been talking about for some time, trying to find a way to do this because we all think it could help.”

Epoch Times contributed to this report, adding Reader’s and the family member’s quotes.