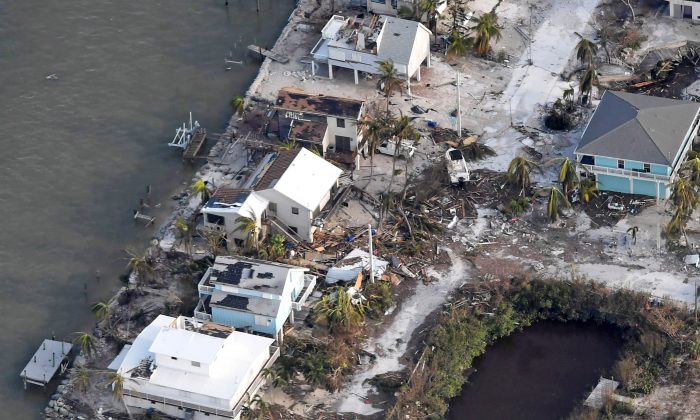 Damaged houses are seen in the aftermath of Hurricane Irma on September 11, 2017 over the Florida Keys, Florida ( Matt McClain -Pool/Getty Images)
US

10,000 Possibly Stranded in Florida Keys Because of Damage Caused by Irma

The U.S. Defense Department said Monday, Sept. 11, that it may need to help evacuate about 10,000 residents who got stranded in the Florida Keys by Hurricane Irma.

The Keys, a group of islands in Florida got pummeled by Irma’s destructive path on Sunday, Sept. 10.

Extensive damage caused by Irma may prompt the mass evacuation, according to a statement by the Department of Defense.

“Damage to the Keys may necessitate evacuation of the 10,000 people who did not evacuate prior to the storm,” the statement said.

The department also said that water lines were affected.

“The main water line into the Florida Keys is reported off-line,” said the statement.

Irma has caused “widespread water outages in the smaller distribution systems,” causing low-pressure conditions as well as water outages in some areas, according to the Florida Keys Aqueduct Authority website on Sept 10.

The damage was so widespread that a “precautionary boil water notice (PBWN) throughout the Keys” was issued in a Facebook Post by the water department.

According to the post, a PBWN is “a public statement advising customers to boil tap water before consuming it.” Since damage has occurred and repairs could not be met in time, the water could possibly become contaminated.

The Aqueduct Authority issued the boil water notice on Sept. 10 and said that residents could still use tap water for showering, baths, shaving, and washing. But they warned people not to swallow or allow water in the eyes, nose, or mouth.

Time spent bathing should also be lessened, the Authority cautioned. While the risk of contracting an illness is small, individuals who have surgical wounds, are immunosuppressed, or have a chronic illness may want to consider using bottled or boiled water until the notice is lifted.

As of writing on Tuesday morning, Sept. 12, the water notice had not been lifted.

Below are the voluntary steps issued by the Aqueduct Authority to ensure that water used is safe:

• Bring the water to a rolling boil and hold it there for one (1) minute.

• Use a disinfecting chemical. If you cannot boil water, you should put 8 drops of common household bleach (about 1/8th teaspoon) into 1 gallon of tap water, then shake it and allow it to stand for 30 minutes before drinking. If the water is cloudy, use 16 drops (about 1/4 teaspoon) of bleach instead of 8, shake it, and let it stand for 30 minutes. There should be a slight chlorine odor. Use common household bleach that has 5 percent to 6 percent active ingredients. Use food grade containers. Don’t use bleach that has perfume scents added.

• Use water purification tablets or iodine that many sports and camping stores sell.

Irma has now been downgraded to a post-tropical cyclone, sustaining maximum winds of 25 mph and moving at a speed of 10 mph, according to the National Hurricane Center. Currently, Irma is bringing generally moderate rainfall to areas of the southeastern United States, Tennessee, and Ohio Valley.