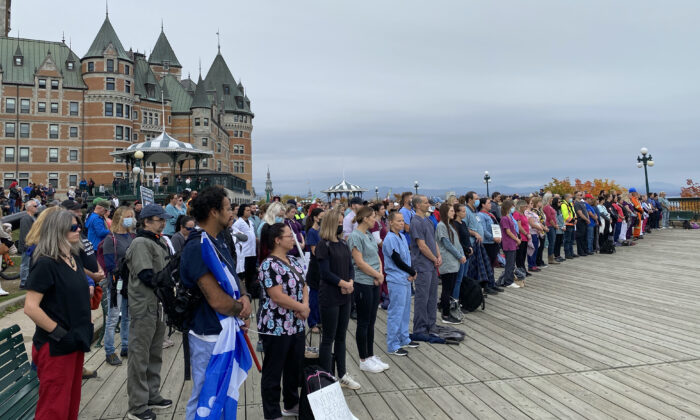 About 1,000 workers from a variety of professions held a silent rally in Quebec City on Oct. 15 to protest against the province’s COVID-19 vaccination mandates.

Using the rallying cry “Code White,” an emergency colour code send out by health-care staff when they face a violent situation and need backup, the event called on front-line workers and first responders to stand together in solidarity and reject the Quebec government’s vaccine passport.

Attendees including nurses, policemen, teachers, and military veterans locked arms and stood solemnly in silence for 10 minutes on Dufferin Terrace, a long wooden sidewalk next to the Château Frontenac hotel on the St. Lawrence River.

“So the goal for the Dufferin Terrace is to form a human chain of professionals, a doctor, a firefighter, a nurse, a policeman, all in a column to make a line of protection for the people who are going to lose their jobs on October 15 who are targeted by the mandatory vaccination,” rally organizer Maxime Ouimet said in a Facebook post on Oct. 11.

“This call is not only for the people who are going to lose their jobs but also for their colleagues. It is a request for a Code White, a request for backup.”

The Quebec government announced recently that all health and social services workers were required be fully vaccinated by Oct. 15. Workers failing to comply would be reassigned to other duties if possible. Those who refuse to be vaccinated won’t be allowed to work and will not be paid.

The deadline has since been extended to Nov. 15 as the province’s overstretched health system can’t withstand losing an estimated 22,000 workers who are either unvaccinated or not fully vaccinated.

Collège des médecins du Québec, the college that oversees medical practice and physicians in Quebec, went a step further by mandating vaccination for all physicians. Doctors who don’t comply will see their licences suspended and won’t be allowed to perform remote consultations or do follow-ups on exam or lab results. The initial deadline of Oct. 15 has also been extended to align with the government’s date of Nov. 15.

“We unite together to tell the government and people of Quebec that no front-line or educational worker has ever discriminated against any student or patient infected with COVID-19 when they entered our emergency services, vehicles, and schools,” says a posting on the website of rally co-organizer Refus Global QC.

“Why is the government of Quebec, who are our elected officials, discriminating against us now?”

Protests have been taking place in a number of cities in recent months, as several provinces rolled out vaccination passport systems.

On Sept. 5, thousands of people took to the streets in downtown Montreal to denounce Quebec’s COVID-19 restrictions, including the vaccine passport when it was implemented on Sept. 1

In Toronto, several hundred people have been rallying in the downtown area on Saturdays to voice their opposition to Ontario’s vaccine mandates.

In front of Calgary City Hall on Sept. 7, roughly 55 police officers and firefighters stood in silent protest against mandatory vaccinations.

The Justice Centre for Constitutional Freedoms wrote to the Ontario government in September urging it to rescind its mandate, citing “deep concerns” about the constitutionality of the measure.

Meanwhile, the Canadian Constitution Foundation has launched a legal challenge against the B.C. government’s vaccine passport system for failing to allow exemptions for individuals who cannot be vaccinated for medical reasons.