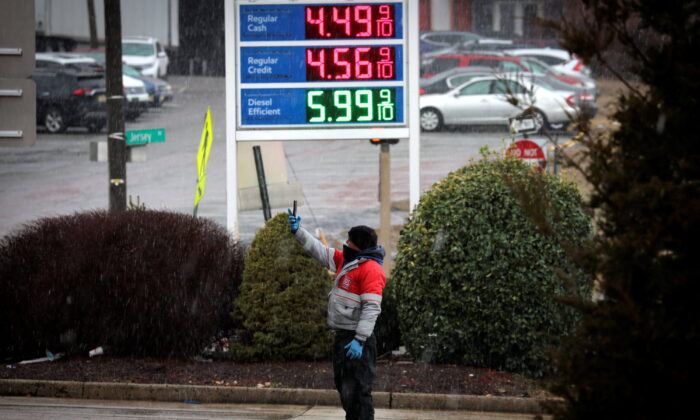 Authorities in Houston, Texas, are investigating after thieves allegedly stole some 1,000 gallons of diesel from an area gas station, according to the station owner.

Jerry Thayil, whose father owns the Fuqua Express gas station, told CNN this week that thieves stole from the station for three days, getting away with between $5,000 and $6,000 of diesel amid soaring gas prices nationwide. Thayil said thieves came back on a fourth day but were stopped by him.

The station has “bills to pay, we got employees that count on us, that need that money,” Thayil told Click2Houston, adding that he discovered the alleged scheme by reviewing surveillance footage.

Thayil told the outlet that he noticed a dark-colored van parking near the station’s storage tanks on several occasions.

“At first we were like … I wonder what he’s doing there because we didn’t see anyone get out of the vehicle but then we realized there’s probably a trap door inside the vehicle and he’s pumping like that,” he said.

The Houston Police Department told CNN that they are investigating the incident. The Epoch Times has contacted the department for comment.

The brazen incident comes as stations across the United States have increasingly reported gas thefts as AAA data shows that prices for all types of fuel, including diesel, remain relatively high. The average price for a gallon of regular gasoline is $4.30 nationwide, and for diesel, it’s $5.10.

A Chevron station in Spring, Texas, reported several incidents where thieves allegedly stole thousands of gallons of gas from their storage tanks.

“We put out some social media recently warning people that we are seeing a few cases of suspects using power drills to puncture a hole and siphon gas,” said Kerby Duncan with the Everett Police Department in Washington state.

“There have only been a few cases of this and we wanted to educate our community on how to protect themselves, and with sharply rising gas prices, we would expect to see more,” he told The Epoch Times this week.

The Shasta County Sheriff’s Office in California also issued a warning to be alert for gas theft as prices rise.

“Of course, purchasing a locking gas cap and parking in a visible, well-lit area are on the top of the list, thieves have begun cutting filler lines and puncturing gas tanks to steal gasoline rather than siphoning,” the office wrote.