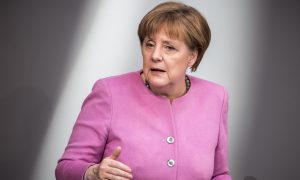 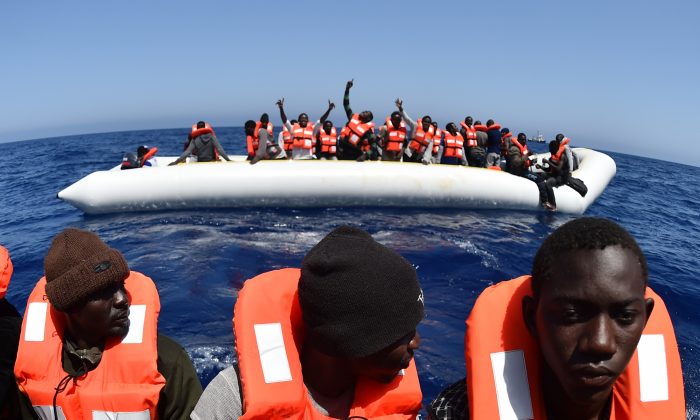 Migrants and refugees are rescued during an operation at sea on May 24, 2016, in the Mediterranean sea in front of the Libyan coast. (Gabriel Bouys/AFP/Getty Images)
Europe

1,000 Drowned Last Week in Mediterranean—One of the Deadliest in Migrant Crisis

At least 1,000 people died in the Mediterranean Sea attempting to reach the European shores in the past week, according to the International Organization for Migration (IOM).

“The past eight days marks one of the deadliest periods yet in the migration crisis, which is now in its fourth year,” the organization stated on May 31.

Over 200,000 have been estimated to reach Italian borders by sea between Jan. 1 and May 29, often using unseaworthy barges in poor condition.

Over 2,400 have paid their lives for attempting the risky journey across the Mediterranean.

The most deadly accident of the past week happened on May 26, when a wooden boat with over 550 on board started to take in water.

When a pump on board ran out of fuel, the migrants asked for more fuel from the captain of their tugboat. The tugboat itself carried about 800 migrants.

The captain refused to give them the fuel.

“At this point there was nothing left to do: the water was everywhere and we slowly started to sink,” said one of the survivors identified by IOM as Stefanos from Eritrea.

The captain of the tugboat cut the tug rope, leaving the wooden boat behind.

“There were between about 35 women and 40 children next to me: they all died,” said Stefanos, one of only 87 who survived.

Survivors told IOM they did’t want to take off in a boat without an engine, but were forced aboard by the smugglers.

Arrivals sharply increased in April and May this year, partly due to better weather and partly due to use of bigger wooden boats that can carry more people, said Federico Soda, Director of the IOM Coordination Office for the Mediterranean in Rome.

“Smugglers put over 700 migrants in the wooden boats, whereas the rubber ones generally carry only 100 to 120 people,” he said. “During the last few days we have had major accidents involving unsafe wooden boats. This also explains the increase in the number of migrants dead or missing: one accident can result in hundreds of fatalities.”

While Italy has seen mostly African migrants this year, Greece faces influx from the Middle East.

On 27 May a boat with 64 migrants issued a distress call while navigating south of Crete. The Greek Coast Guard, along with two fishing vessels, managed to transfer the migrants to the Port of Siteia. IOM visited Siteia a day later. Most of those rescued were from Afghanistan, Iran, Iraq, and Syria. The migrants included a 9-month-old Iraqi baby and a 71-year-old Iraqi woman, traveling alone. According to the migrants, they were forced to pay the smugglers between $5,000 and $7,500 for their passage.

A 40 year old Iraqi man shared his story with the IOM:

“Before the war our life in Iraq was wonderful. I owned a supermarket, a truck and I had a beautiful house. Now I have nothing. I sold everything to save my family and myself. In 2014 I managed to send my 3 children and my wife in Glasgow. I paid $25,000 for each one of them to travel on a false passport from Turkey by air. I missed them so much I decided after two years to leave Iraq. Meanwhile the situation with terrorists has been deteriorated. We are not safe. Every night I see the terrorists 300 meters away from my house. Our lives are constantly at risk.”

“I found a smuggler in Iraq who transferred me to Istanbul, Turkey. In Istanbul it is very easy to find smuggler. Every coffee shop is full of smugglers. They ask you “Where do you want to go? Germany?” They send you to Germany. Turkish police and smugglers work together. Turkish policemen ask for bribes from the migrants in order to let them leave without documents. From Istanbul, the smugglers took us to the Dalamar district of Marmaris. I spent 10 days in a house, along with other migrants. We were locked in a house.”

“After 10 days, they transferred us to the port. We saw the ship at midnight. The smuggler asked if we wanted to get on board. It seemed to be seaworthy and I paid $5,000 to go to Italy and then on to Scotland to find my family. The Turkish police oversaw the whole operation. They assisted us to get on board and they escorted us 200 meters away from the coast, and then they turned back!”

“On the ship the smugglers took our mobiles and locked us inside for the most of the journey. They were on the upper deck, where they were driving and smoking marihuana. They didn’t let us see them. They just shouted at us: “Shut up! Shut up!” They didn’t give us food or water for 36 hours. There was no toilet on our deck.”

“The ship was decent, but the weather was rough. Water came into the hold from the waves. Everyone was crying, vomiting and some lost conscious couple of times. We were scared and thought we were dying. At this point we called the Coast Guard and asked them to rescue us.”

“Now I want to go to my family more than anything else. I can’t wait for six months until the asylum procedure ends. I have money. I will pay someone to take me to my family. I sold everything, just to be with them. I will go. I don’t care if I live or die during the journey. Six months is too long.”