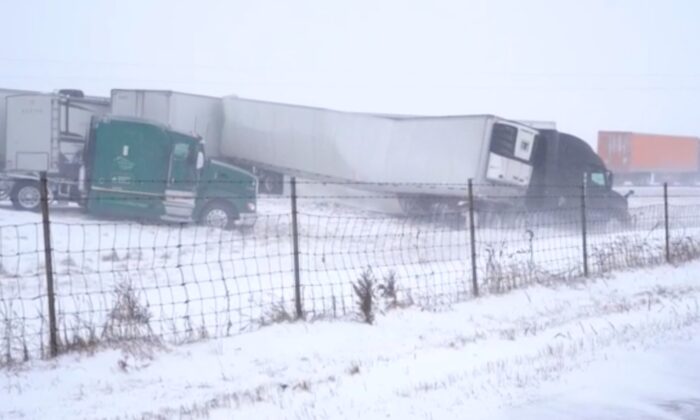 Trucks in a pile-up on an Interstate north of Normal, Illinois, on Feb. 18, 2022. (Courtesy of SCV/Simon Brewer via CNN)
Illinois

A heavy snow storm in Illinois has been blamed for the partial closure of Interstate 39 after over 100 cars were involved in multiple crashes late on Thursday, authorities said.

The Illinois Department of Transportation (IDOT) said they don’t expect the highway, which runs from Illinois to Wisconsin, to reopen until later on Friday. As of 10 a.m. local time, the road remained closed in both directions north of Normal, a town in McLean County, part of the Bloomington metropolitan area.

“Together, with our local partners, we are diligently working to ensure motorists are safely escorted from the area to warming centers,” Illinois State Police (ISP) said in a statement.

Here’s a look at road conditions as of 10 am. Things got a little hairy last night in central Illinois, with several interstates shut down temporarily. I-39 remain closed in both directions north of Normal.

Make sure to allow extra travel time if you’re going to be out. pic.twitter.com/jKA6cHN6HA

The pileup, which involved about 100 cars, trucks, and big rigs, left a 17-mile stretch of the I-39 shut down for a second day.

There were no reports of injuries in the pileup, which happened as winds gusted up to 40 mph and cut visibility during a storm that swept through the Midwest and other parts of the nation.

The winter storm had also created travel problems in other parts of Illinois, including a vehicle pileup on Interstate 55 southbound.

“The highway is a sheet of ice,” storm chaser Simon Brewer told FOX Weather. “The winds here in this area are so high they are just pushing trucks off the highway.”

Brewer counted about 50 smashed tractor-trailers and cars just in Towanda, adding that “vehicles go on for as far as the eye can see in both directions.”

Meanwhile, two international airports in Chicago saw more than 500 flights canceled during the storm, which dropped more than 4 inches of snow across the region.