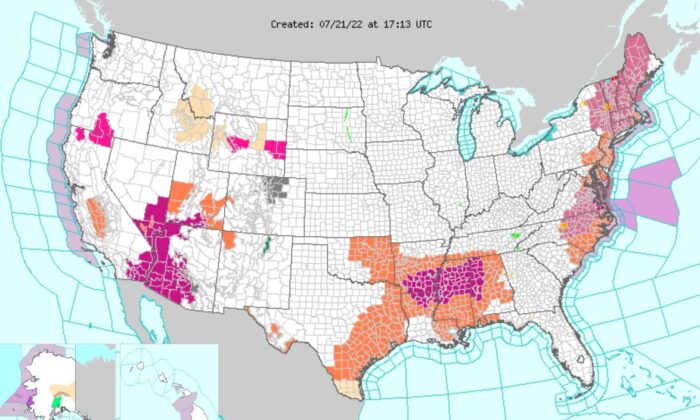 More than 100 million people in the United States are under heat alerts on Thursday amid a spate of hot weather.

Excessive-heat warnings or heat advisories cover several regions, according to maps posted by the National Weather Service, including the Central Valley in California; Las Vegas, Nevada; Phoenix; parts of Texas; Birmingham, Ala.; as well as much of the East Coast, including Boston, Washington D.C., and New York City.

“Dangerous heat to continue impacting portions of the southwestern, south-central, and eastern U.S.,” the Weather Service wrote, describing the heat as “oppressive.” It further noted, “Above-normal temperatures will continue to prevail across much of the U.S. through the end of the week, with a significant portion of the population remaining under heat-related advisories and warnings.”

But in the southwest United States, an “excessive heat warning” will extend from “southeastern California and western Arizona northward into southern Nevada and southern Utah” on Thursday and Friday, said the agency. Daytime temperatures, it warned, will exceed 100 degrees Fahrenheit across much of the southwestern region on both days—with some places hitting 110 degrees.

Highs could top 120 degrees Fahrenheit in Death Valley, California, until Saturday, say forecasters. Death Valley, located in the Mojave Desert, has long been considered one of the hottest and driest places on Earth.

And, “from eastern New York into New England and from the lower Mississippi Valley to the Carolinas,” said the advisory, “conditions are expected to become favorable for storms producing damaging winds across those areas today.”

“Ahead of the front, very warm and humid air will remain in place along the East Coast. Heat advisories extend all the way from the eastern Carolinas to New England, where the heat combined with the humidity will support heat indices in the upper 90s and lower 100s in many locations today,” according to the NWS bulletin.

“To reduce risk during outdoor work … schedule frequent rest breaks in shaded or air conditioned environments,” the NWS said. “Anyone overcome by heat should be moved to a cool and shaded location.”

The heat wave in 1936, which occurred in the middle of the Great Depression and Dust Bowl, produced some of the hottest temperatures on record across the United States—namely across the Midwest, Plains, and Great Lakes regions. Some places in Iowa, Minnesota, and Wisconsin hit above or close to 110 degrees F. For decades, 1936 remained the hottest U.S. year on record, although some scientists estimate that 2021’s summer was hotter.