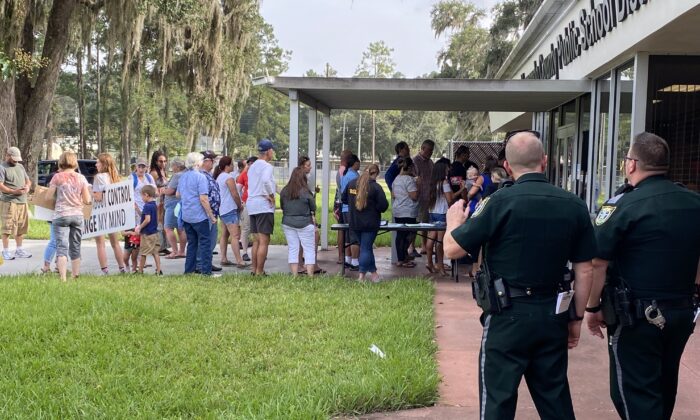 Citizens line up to attend the emergency school board meeting regarding a proposed mask mandate for children in Hernando, County, Fla, on Aug. 31, 2021. (Patricia Tolson/The Epoch Times)
Florida

10-Year-Old Urges Citizens to ‘Be Like Power Rangers and Fight Back!’ After Florida School Board Imposes Mask Mandate

Nearly 100 residents, mostly parents and grandparents of Hernando County school students, waited hours, standing in shifts in the sweltering heat, to have their chance to express their opinions about the proposed mask mandate. The overwhelming majority adamantly opposed the measure. Less than five came to express support. In the tense aftermath of an Aug. 24 school board meeting, where citizens began shouting at the board and each other, there was a notable presence of law enforcement outside of the building as well as inside the board room. Speakers were placed outside for the overflow crowd to hear proceedings inside.

Following public comments, the board engaged in discussion before casting their votes. Board Chair Linda K. Prescott (District 2), Susan Duval (District 5—who attended by phone) and Kay Hatch (District 1) voted to impose the mask mandates. Vice Chair Gus Guadagnino (District 4—also in attendance by phone) and Jimmy Lodato (District 3) voted against the measure.

In a leaked email, sent to a “concerned” parent before the meeting, Duval made it clear she had already made up her mind to impose the mask mandate before hearing any of the public comments.

“Our district is in crisis and I don’t see a reasonable way out without masks, better sanitation measures, better social distancing, etc.,” Duval stated in her email. “My support is for a 30 day mask mandate with a medical exemption. If after 30 days, the positivity drops [to] five percent or less, the masks become optional. If the rate is six percent or higher, we go for another 30 days. I hope that clarifies my position.”

Prior to public comments, Hernando County General Counsel Dennis Alfonso advised that not allowing parents to opt out of a mandatory mask mandate for students would not only place the board in violation of Florida’s Parents’ Bill of Rights (pdf), it would subject them to the governor’s promise to withhold the salaries of school board members who imposed a mask mandate for children.

A prepared statement, read prior to the vote, suggested Lodato had already decided to vote against the measure because it would violate the governor’s July 30 executive order (pdf) reinforcing the Parents’ Bill of Rights.

However, on Aug. 27, a Leon County judge struck down the governor’s executive order. DeSantis has vowed to appeal the ruling.

“It’s not surprising that Judge Cooper would rule against parents’ rights and their ability to make the best educational and medical decisions for their family, but instead rule in favor of elected politicians,” Taryn Fenske, Communications Director for Governor DeSantis, said in a statement. “This ruling was made with incoherent justifications, not based in science and facts—frankly not even remotely focused on the merits of the case presented. We are used to the Leon County Circuit Court not following the law and getting reversed on appeal, which is exactly what happened last year in the school reopening case. We will continue to defend the law and parents’ rights in Florida, and will immediately appeal the ruling to the First District Court of Appeals, where we are confident we will prevail on the merits of the case.”

Jared Ochs, Director of Communications and External Affairs for the Florida Department of Education, told The Epoch Times they “are immensely disappointed” that the ruling issued by the Second Judicial Circuit “discards the rule of law.”

“This decision conflicts with basic and established rights of parents to make private health care and education decisions for children,” Ochs stated further. “We will continue to fight to make sure every child has access to education. We are committed to the fundamental rights of parents and will push forward on appeal to ensure that this foundation of democracy is upheld.”

On Aug. 30, Florida’s Department of Health announced that it is withholding funds from Alachua and Broward County following their defiance of the governor’s ban on mask mandates that do not permit parents to opt out.

“Unlike some other counties that are violating Florida law, the Hernando County School Board has enacted a mask policy that complies with state law, by ensuring all parents have the right to opt out their own kids from forced masking,” Christina Pushaw, Press Secretary for the Executive Office of Florida Gov. Ron DeSantis told The Epoch Times. “We will be closely monitoring all districts that adopt mask policies like Hernando’s, to ensure that the choices of parents are respected by everyone in the school community. We have zero tolerance for unequal treatment, including discrimination against children based on their parents’ choices about masks.”

“There is no scientific basis for forced-masking children,” Pushaw said further. “Sadly, some school board members around the state are focused on playing politics instead of doing their research and doing the right thing for kids and families. By the way, if you compare counties in Florida that mandate masks versus those that respect parents’ rights, the data doesn’t support the idea that mask mandates are effective in any way. For example, the infection rate in Martin County (mask optional) is 1.37 percent while that of Palm Beach County (mask mandate) is 1.82 percent. If mask mandates work, why is Palm Beach reporting higher COVID prevalence than Martin?”

“I’m a mother and a front-line worker,” Carella Kara told The Epoch Times. “I have had the vaccination, Moderna, but was against it. So far, it has kept me safe along with proper PPE. I feel this virus and its changes [are] happening too fast for bodies to handle. If we cover with masks we protect ourselves and others from spreading it so fast. This is crazy not to help protect our kids.”

Kara was unable to attend the meeting. She was at home caring for her eldest daughter, who has contracted COVID-19. “I almost lost my youngest daughter [to COVID-19],” Karra said. “and now my oldest is on oxygen.” Kara’s husband has also had COVID-19.

“I still say parent choice,” Pam Everett told The Epoch Times. Everett was one of those who spoke against the mask mandate at the meeting. “They pay the taxes to the schools. They need to be in control about their children’s health. This is just one way of control and their hold is just going to get stronger and stronger.”

“It has no teeth,” Krysia Bailey told The Epoch Times as a message to other Hernando County citizens regarding the School board’s decision. “You can still send your children in without a mask. Don’t be afraid of the online form. Take a stand. Fill out the form. Let them know they do not have the authority to tell our children that they cannot breathe fresh air. Be there at the October 12 meeting. We must draw the line in the sand. Our children have been used as pawns for the last 20 months. It’s time to stop.”

“You have not earned the right to make medical decisions for my children,” Bailey admonished the board during public comments at the Aug. 31 meeting. “You haven’t earned the right to make any medical decisions for any child in this county. Even Vladimir Putin today said that he can’t force people to wear a mask in Russia. Are you less pro-choice and liberal than Vladimir Putin? Do we need to move to Russia for our children to breathe free?”

Bailey told the board on Aug. 31 she recently moved to Florida from Maine because she wanted “to be free.”

“I did not vote for Dr. Fauci or the Center for Disease Control, so the local leaders have to stop hiding behind useless recommendations from the people who have gotten it wrong from the beginning and make the tough decisions the constituents elected them to make,” Jose David, a Hernando County resident and “proud father of three wonderful boys” told The Epoch Times. “Hernando County lately doesn’t feel like the county I came to love when I moved here nine years ago.”

“Governor DeSantis stands for parents’ rights, makes data-driven decisions, and follows the science,” Pushaw told The Epoch Times.”There is no empirical evidence to support the assertion that the benefits of forced masking of schoolchildren outweigh the potential harms. Masking kids under 12 is not recommended in many European countries, because their health authorities have found that the risks are not well understood—and the data shows that forced—masking of young children has a negligible impact on COVID prevalence and spread.”

“There is no authority more ‘local’ to children than their own parents,” Pushaw explained. “Governor DeSantis trusts Floridians to make the best choices for themselves and their families.”

“Thank you for your coverage of this masking issue in Hernando,” Pushaw told The Epoch Times. “I am SO happy to hear that parents are speaking out for their rights to make health and education decisions for their own kids, and Governor DeSantis fully supports them.”