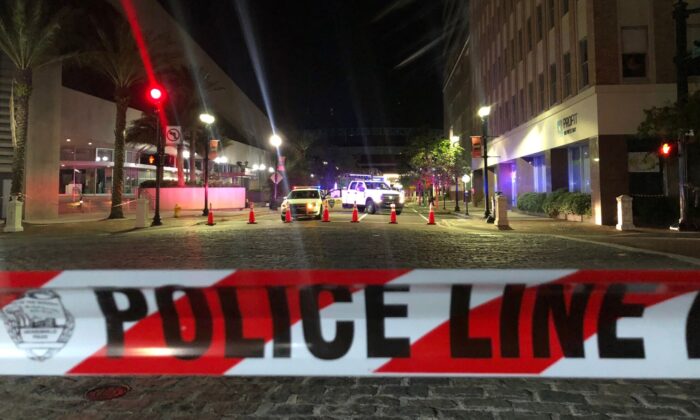 A police car behind police tape is seen blocking a road in Florida on Aug. 26, 2018. (Gianrigo Marletta/AFP via Getty Images)
US

A 10-year-old Orlando girl shot and killed a woman who was arguing with her mother over a social media post, a police arrest affidavit said on May 31.

The girl and her mother were taken into custody on May 30 following the fatal shooting of Lashun Rodgers, 41, outside an apartment complex, according to the Orlando Police Department.

Lakrisha Isaac, 31, the child’s mother was arrested and charged with manslaughter by culpable negligence, child neglect, contributing to the delinquency of a minor, and aggravated assault with a firearm.

She is being held at the Orange County Jail without bond.

The girl was turned over to the Florida Department of Children and Families.

The affidavit indicated that officers spoke with three witnesses to the event, including the victim’s boyfriend.

Investigators said an argument between two women, Lashun Rodgers and Lakrisha Isaac, over a social media post resulted in a “fist fight” at a downtown apartment complex where the two women resided.

Isaac, who according to witnesses was intoxicated at the time of the altercation, had handed her daughter a backpack as she began to fight with Rodgers in the breezeway of an apartment building.

The child found the handgun and shot it twice, hitting Rodgers in the head, police said.

Then she reportedly yelled, “She shouldn’t have hit my momma.”

The mother then pointed the gun at Rodgers’ boyfriend, who had attempted to “break up the fight before the shots were fired,” before returning to her apartment, the report said.

Rodgers was pronounced dead at a local hospital.

Her boyfriend told police Isaac had “thrown the first punch” and that he tried to “pull Rodgers away” but she “broke free” and continued to confront Isaac, the affidavit said.

A neighbor confirmed the boyfriend’s account to the police and said Isaac had approached her to ask about Rodgers and the social media post.

The neighbor said Rogers then told her to go inside her apartment so she “wouldn’t be involved in the fight,” the report said.

Other witnesses told police the child said that she was defending her mother.

The Orange-Osceola State Attorney’s Office is considering charges against the girl.