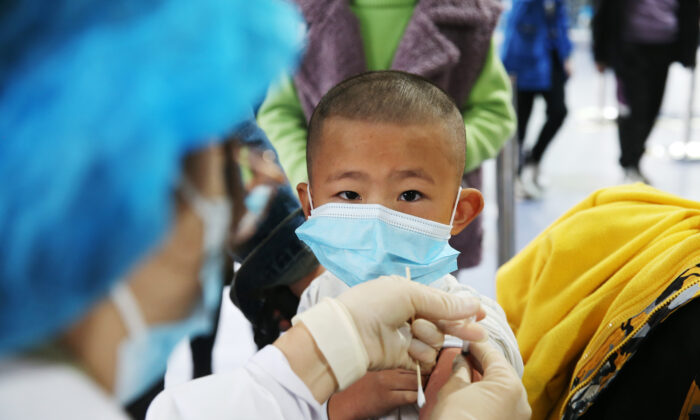 A medical worker vaccinates a child at a temporary vaccination site for COVID-19 in Chongqing, China, on Nov. 3, 2021. (Yang Min/Costfoto/Future Publishing via Getty Images)
By Sophia Lam

A young Chinese girl died of leukemia on Oct. 23, 2022. She had previously received a Chinese Sinovac COVID-19 vaccine on two occasions, and her father accuses the vaccines of causing the leukemia that led to her death.

Chen Yilin, a 10-year-old girl from China’s central Henan Province, was blind and deaf from the disease before she died, according to her father.

“My daughter suffered a lot. Her bones ached every day as if being cut by a knife. Blood flowed down from both of her nostrils, and after the nostrils were blocked, black blood lumps [blood clots] were spat out from her mouth,” said Chen Lei (pseudonym), the father.

Chen told the Chinese language edition of The Epoch Times on Dec. 2 that Yilin’s legs ached after she received the first jab of vaccines manufactured by Sinovac, a Chinese vaccine company. The girl’s school hadn’t informed her parents, and administered the vaccine in November last year without getting their consent, Chen said.

Chen worked in another province, so the girl lived with her grandparents. They thought the girl’s pain in the legs was due to lack of calcium and didn’t pay it much attention. But 28 days later, after she received the second jab of Sinovac vaccine, she began to develop a fever and had a nosebleed. Her symptoms were relieved after some medications last year, but they became severe at the beginning of 2022. She was hospitalized on May 6 and diagnosed with leukemia on May 8. The local hospital told Chen that Yilin’s leukemia was not curable.

A screenshot of Chen’s unpolished Weibo post, however, was published somehow on WeChat by an influential blogger. Before disappearing from WeChat, it was cited by a Chinese netizen named Wei Baixing on his own jiangyaojia website, the name of which literally means “reducing medicine prices.”

Wei Baixing are homophones of a Chinese phrase “for the commoners” and used as a pseudonym by a reportedly medical professional who exposes the difference between retail and wholesale prices of about 14,000 medicines, in an effort to reduce the retail prices of medicines, most of which are dozens of times higher than wholesale prices. Wei’s post is still available on his jiangyaojia website.

The post shows no date of publication. It says Wei read the screenshot of Chen’s unpublished post on June 8 and then  contacted Chen for a long talk. Netizen comments on the post are dated June 10 and 11. The clicks remained at 55,118 from Wednesday when The Epoch Times first viewed it until publication time.

Chen told The Epoch Times that he brought his daughter to more than a dozen top hospitals in China, hoping to save her life.

Chen and his daughter first went to the Institute Of Hematology and Blood Diseases Hospital, the top facility of its kind in China, inTianjin. But the doctors at the hospital referred them to Tianjin Children’s Hospital, which later turned them to the No. 1 Affiliated Hospital of Zhengzhou University in their home province of Henan. There, families of patients with similar symptoms suggested they go to No. 3 People’s Hospital in Zhengzhou, where the girl was treated with various chemotherapies and targeted drugs, all with little healing effect.

In the end, the hospital suggested to Chen that axicabtagene ciloleucel, a CAR-T Cell Therapy product, be administered.

“I have spent over 1.9 million yuan (about $272,000) for my daughter’s medical treatments. I have sold everything that I can sell for some money, and I am deeply in debt,” Chen told The Epoch Times in the interview.

His efforts didn’t save his daughter.

After receiving the axicabtagene ciloleucel, his daughter’s genes mutated, according to Chen. Experts from more than a dozen hospitals in Henan Province couldn’t do anything to stop the continuous mutation of the gene. They told Chen that they couldn’t find any solutions to control the mutation and that they hadn’t encountered this before.

Yilin died in October even though her father tried to find every means he could to save her.

“If there is one case, or ten cases, or a hundred cases [of leukemia after taking COVID-19 vaccines], it can be said that these cases have nothing to do with the vaccines. Now if you go to a big hospital and ask doctors and patients there, they will tell you the disease has to do with the vaccines,” Chen said.

Zhao Xin (pseudonym), a resident of Wuhan, the capital of China’s central Hubei Province where COVID initially broke out at the end of 2019, took his 19-year-old daughter to visit doctors in Wuhan and Beijing. His daughter was diagnosed with leukemia about two months after her third jab of Chinese COVID-19 vaccine. Zhao didn’t identify the vaccines his daughter was given when speaking with the Chinese language edition of The Epoch Times on Dec. 2.

Zhao’s family didn’t realize that the girl’s illness was related to the vaccine at first. Later, they learned from talking with other patients and their families that there were particular time frames that connect leukemia to vaccinations: those who received two doses of vaccine were diagnosed within about six months; those who received three doses of vaccine were diagnosed in two to three months after the last dose.

“From the third floor to the eighth floor in Wuhan Union Hospital, each floor has at least 50 beds, which have been occupied by patients with leukemia. You can see, from the number of patients in this hospital, how many there are across China,” Zhao said. He told the publication that at least five patients died within 12 days after admission to the hospital.

He later took his daughter to a hospital in Beijing, and found there were 205 patients with the same disease in the hospital.

A Chinese blogger posted Zhao’s daughter’s case online, which soon attracted the attention of a Chinese doctoral advisor, whose child was diagnosed with leukemia as well. The doctoral advisor added his child’s case and reposted it, which quickly trended and attracted over 3 million clicks that night.

“I found from those replies under the post that many people experienced various adverse reactions after vaccination. In addition to leukemia, vaccinated people also developed diabetes, heart attack, myocarditis, mastitis, and urticaria. Some young girls even had menopause after vaccination,” Zhao told The Epoch Times.

According to the Chinese edition of Radio Free Asia (RFA) in June, it obtained a list of 486 patients diagnosed with either diabetes or leukemia who became sick after they were vaccinated from August to December last year.

Chen Lei said that Sichuan news portals and other Chinese media reported more than 30,000 cases of side effects when 200 million injections of CoronaVac vaccines were administered in China. Now, with more than 3 billion injections of the vaccines, more than 120 diseases have been reportedly connected to the vaccinations, including eczema, shingles, heart attack, cerebral infarction, lupus erythematosus, liver cancer, and lung nodules.

The Epoch Times wasn’t able to verify the alleged number of cases of side effects. The top health body of the communist regime announced that a total of 3.44 billion vaccinations have been administered to people in China as of Dec. 7, 2022.

Appeals for Investigation and Exposure Suppressed

On Dec. 1 and 2, families of patients went to the Chinese regime’s top disciplinary watchdog and health body in Beijing to appeal for an official investigation into and exposure of adverse events caused by Chinese vaccines, according to Chen, but some of the petitioners were detained by police, and Chinese reporters they contacted told them that they were not allowed to report on the topic.

Chen condemned the regime’s health commission for detaining and beating petitioners as well.

“I went to Beijing to ask for an investigation of CoronaVac vaccines and demanded that Sinovac apologize to us and compensate the victims of their vaccines,” Chen said, “Many children need financial help to cover their tremendous medical treatment expenses.”

“The disease [leukemia] was caused by the vaccination. But the authorities don’t allow me to speak out about this. Every word I said was said by reporters, doctors, and academicians at the Chinese Academy of Sciences,” Chen added.

He blasted the regime’s top health body for assessing the vaccines and promoting vaccination.

China’s state council (the regime’s cabinet) responded to online allegations at a press conference on July 23, 2022, that COVID-19 vaccination “will not cause leukemia and diabetes” and that there are “irresponsible and wrong remarks on the Internet” relating the diseases with the vaccination.

Chen is now monitored and controlled by local police in his hometown.

RFA reported in June that leukemia patients and their families were told by Chinese reporters that they “can’t report” on the adverse events and that their posts asking for help were blocked by Chinese social media platforms.

According to Chen, the highest compensation he knew of was 2.6 million yuan (about $554,000), which was paid to a patient who is an official in China’s eastern Jiangsu Province.

For commoners, they don’t get as much compensation as that official did, Chen said. Patients and their families are required to sign a confidentiality agreement, and the compensation is paid in installments, according to Chen.

“If you expose the reverse events, you are not going to get the remaining compensation,” Chen said.

Chen learned that there were compensation cases in Henan Province, Jiangxi Province, Inner Mongolia, Jiangsu Province, and Tianjin City. He added that a man from his home province of Henan was beaten by police and forced to accept a compensation agreement of 250,000 yuan (about $35,000). The man’s son died after being vaccinated. He rejected the compensation after he was released, and he has kept petitioning for an answer.

The Epoch Times wasn’t able to verify the information on compensation agreements.

The Epoch Times reached out to the provincial health commissions of Hubei and Henan and to Sinovac and hasn’t received a reply as of press time.

Gu Xiaohua and Xia Song contributed to this report.