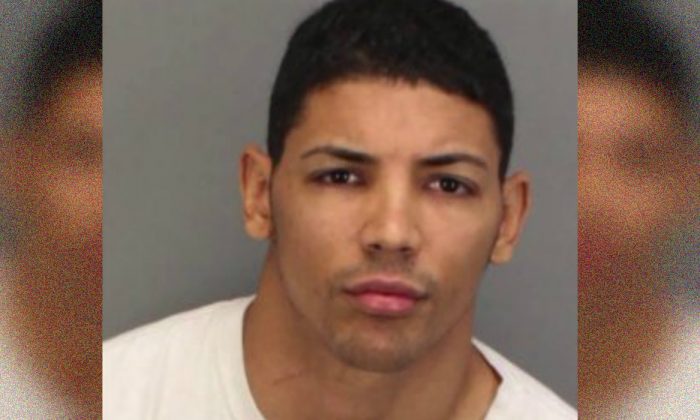 A world boxing champion has been sentenced to 10 years in prison for driving intoxicated in a California crash that killed a pregnant mother-of-four and her unborn baby.

Marcos Forestal Coutin, 29, plowed his BMW head-on into a Chrysler minivan driven by Krystil Kincaid on Sept. 9 last year, before live-streaming from the crash site in Hemet on social media.

Kincaid, 29, later died in hospital, together with her unborn child, which was due a month later.

Forestal Coutin originally pleaded not guilty but switched to a guilty plea to gross vehicular manslaughter while driving under the influence in March.

On June 27, he was sentenced to 10 years in prison, the maximum possible sentence under California law, according to a statement from the Riverside District Attorney posted to Facebook.

Video footage showed Forestal Coutin live-streaming from the crash site, apparently unaware or oblivious to the fact that 8-month-pregnant Kincaid was lying critically injured in the wreckage of her minivan.

He had been driving his BMW on the southbound lane at a “high rate of speed,” when he veered into the northbound lane, according to a police report at the time, striking the minivan in a “head-on collision.”

Officers arrived at the scene to find Kincaid trapped in the minivan, which was partly on fire.

According to a KTLA report at the time, officials put out the fire, but because her legs were pinned in the wreckage of the minivan, they could not pull her out immediately. She was eventually airlifted to an area trauma center, where she and her unborn baby died.

In a statement at the time of her death on Facebook, he wrote: “My life has been full of adversity, but today I experienced the hardest thing I have ever done. I told my 2 daughters and my 2 sons that a drunk driver killed their mom. The pain and anger I feel within my soul is immeasurable, my heart is broken. Until we meet again my Raven…Krystil Kincaid”

Zach told KTLA that his children arrived at the hospital thinking the baby had arrived early.

“They thought they had a baby sister here,” he said. “They got the worst news of their life. They were told that they don’t have a mom, or a baby sister, anymore.”

According to local reports, she was on the phone to her husband at the time the crash occurred and he heard the screeching of metal.

Forestal Coutin’s original live-streamed video from the crash site has since been deleted, but copies can be found on social media sites.

It was those comments which sparked a change of heart in the grieving husband.

“It wasn’t until I saw that, that I was upset with his lack of humanity and compassion,” he told The Press Enterprise. “It seems to be the kind of person he was. At that moment, I came to the realization that he just killed my wife and my child, and that he only cares for himself. Hopefully, some prison time will allow him to reflect and be a better person when he comes out.”