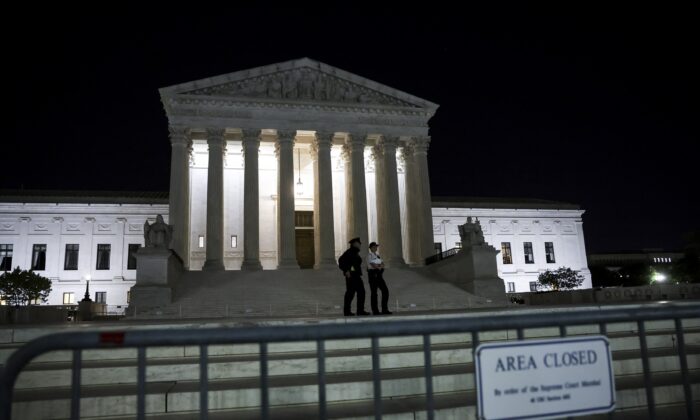 Fencing surrounds the Supreme Court in Washington on May 2, 2022. (Kevin Dietsch/Getty Images)
Viewpoints

10 Ways Information-Shapers Have Infiltrated Our Institutions

Few matters are so important as the integrity of the information we receive and the recent degradation in its reliability.

The recent leak of a Supreme Court draft related to the landmark Roe v. Wade abortion case underscores how corrupted so many of our important institutions have become by those dedicated to shaping public opinion in a sometimes dishonest way.

Nearly every facet of our American institutions has been infiltrated by activists, corporate and political propagandists, and even criminals.

Here are 10 key institutions that have been successfully infiltrated by information-shapers:

High-profile corporations increasingly do business, or withhold business, on the basis of political considerations in an effort to sway public opinion.

Additionally, they take part in removing the ability of some people they disagree with to sell products, conduct bank transactions, or otherwise operate their businesses. One recent example is retailers, including Kohl’s and Bed, Bath & Beyond, banning popular “My Pillow” products from the company owned by conservative and ardent Trump supporter Mike Lindell.

Sports organizations have stepped into the political realm to try to force some views and censor or punish those who take opposing viewpoints. One recent example is Major League Baseball stripping the All-Star Game from Atlanta over a Georgia law designed to strengthen election integrity following a troubled and error-riddled 2020 election.

Sports institutions also are involved in trying to sway public discourse on the issue of males competing as females on girls’ and women’s teams, such as the swimmer born as Will Thomas who switched names to Lia Thomas and joined the women’s team at the University of Pennsylvania, setting numerous women’s records.

Big Tech’s well-known fake fact-checks, censorship, and disinformation have manipulated the information landscape in a more dramatic and chilling way than most any other factor. The biggest example is Big Tech’s censorship of arguably the most important political figure of our time: Donald Trump.

Recent major examples of the sector fostering disinformation include amplifying claims that the Hunter Biden laptop story was Russian disinformation and censoring stories about it, repeatedly backing false information related to COVID-19 while censoring accurate information or legitimate scientific views, and falsely labeling the COVID-19 lab origin story as a conspiracy theory.

The Centers for Disease Control and Prevention (CDC) and other public health agencies have increasingly departed from the realm of public interest and science in order to advance false narratives and disinformation. Recent examples include the head of CDC, Dr. Rochelle Walensky, a year ago falsely claiming that people who are vaccinated don’t carry and can’t spread COVID-19; and the agency knowingly putting out disinformation that falsely claimed original studies showed the vaccine’s benefit for people who had already had COVID-19.

Another example is National Institutes of Health (NIH) officials Drs. Francis Collins and Anthony Fauci privately working with the media to smear and discredit highly credentialed scientists who disagreed with the lockdown approach to COVID-19.

Members of Congress in both parties have gotten caught taking part in questionable information-shaping and manipulation, particularly when it comes to pharmaceutical-related material. One recent example is members of Congress unilaterally writing letters to or contacting Big Tech in order to get certain topics or scientific studies and discussions controversialized or banned.

Some of the members of Congress who are engaged in the efforts are the same ones responsible for their own high-profile disinformation campaigns. A recent example of that is Rep. Adam Schiff (D-Calif.), who repeatedly pushed false and misleading information on the Trump–Russia narrative, lobbying Big Tech to censor certain information related to COVID-19.

Having lost the most powerful tool in its arsenal to shape information, the executive branch has now formed its own extra-constitutional agency to serve that function: the Disinformation Governance Board. The named head of the board, Nina Jankowicz, has widely furthered disinformation in the past.

With blogs and quasi-news outlets such as Axios, Slate, Daily Kos, Huffington Post, Vox, Salon, Talking Points Memo, and Rolling Stone joining more traditional partisan outlets such as the Los Angeles Times, Politico, MSNBC, NBC, The Washington Post, CNN, and The New York Times in dominating the information landscape—while their conservative equivalents are controversialized—the media has proven to rank close to Big Tech in terms of its influence in further misinformation.

America’s colleges and universities have taken increasingly heavy-handed roles in terms of squelching free speech and free thought (when it leans against progressive or radical views), in exchange for a managed environment where only carefully filtered views are allowed, and specific language, expressions, and behavior are mandated.

Many public school systems have grown stronger in efforts to install social engineering and political ideology in teachings and policies. Recent examples include policies involving the use of preferred pronouns when referring to transgender students, and the instruction of critical race theory.

9. Dept. of Justice, FBI, and Other Intel Agencies

The very agencies that should remain furthest above the fray with clean hands have found themselves repeatedly muddied involving major investigations and their political influence efforts. One recent example is the criminal conviction of FBI attorney Kevin Clinesmith, who falsified a document in order to spy on Trump campaign associate Carter Page. Though multiple people would have known about the crime—possibly participating and staying silent—only Clinesmith was charged.

And he was only charged with a relatively minor crime in relation to the significance and avoided any prison time. Meanwhile, the agency hasn’t offered any apology or redress to Page. Other examples include the Department of Justice targeting school parents as possible terrorists, and lopsided prosecution efforts regarding the Jan. 6, 2021, Capitol breach, compared to many more violent events and crimes.

Additionally, intel operators have taken major roles both in front of the camera and behind the scenes to try to shape public opinion using false information and propaganda. One recent example is the “more than 50 former intelligence officials” who “signed a letter casting doubt on the provenance” of an accurate New York Post story about Hunter Biden’s laptop.

Whether it’s the leak to multiple press outlets about Justice Stephen Breyer’s impending retirement or the more problematic new leak of the Roe v. Wade abortion draft, information-shapers have infiltrated the highest court in the land.