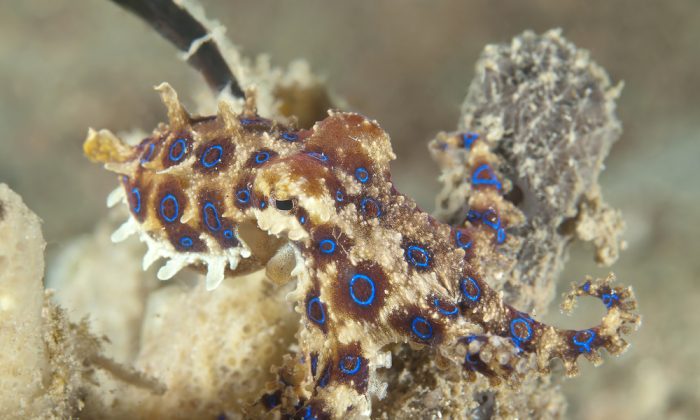 A protruding spine hangs like a fishing pole above the angler’s head—only females have this trait. The “fishing pole” is lights up like a light bulb, attracting prey. When the prey comes close enough, the angler will snatch it up with its big mouth, which is so big it can swallow prey up to twice its size.

The male angler fish is very tiny and unarmed compared to the female.

Don’t be fooled by this harmless-looking snail. The cone snail has been known to kill humans. It has a harpoon-like tooth covered with poison with which it penetrates its foe or prey.

The good thing is, when the cone snail venom is extracted and isolated, it can create a pain killer that is 10,000 times more effective than morphine (without the side effects). The painkillers are still undergoing clinical trials.

This snake has a heat-perception system that allows it to create a 3-D image of its prey or predators even in the dark. It senses the heat with an organ that is between the eyes and the nostrils.

The chameleon changes color according to its stress level and to communicate with other chameleons. It also changes color to camouflage, helping it ambush its prey. Its tongue can extend up to 20 inches, so it doesn’t need to move much from where it has camouflaged itself.

As soon as this caterpillar’s toxic secretion touches your skin, you could have kidney failure or, in a best-case scenario, only burns and an allergic reaction. The toxin is transmitted by the caterpillar’s spine. With deforestation and a reduction in natural enemies, the chances of encountering these nasty and deadily creatures in South America has increased.

The electric eel stuns its prey and can kill its predators by generating around 600 volts of electricity. Within an eel’s body are around 6,000 electrocytes, special cells that produce electrical currents.  Its eyesight is bad, but luckily it can create 10 volts of electrical current to illuminate its surroundings. It can grow up to 8 feet long and to weigh about 45 pounds. It is rarely known to have killed humans, but it can cause human heart failure if it delivers multiple shocks.

It is a beautiful creature, but at the same time, it can be a killer. The Blue rings on the octopus are not always visible; they appear when the octopus is agitated. It contains in a saliva gland tetrodotoxin, a neurotoxin for which there is no known antidote. The same toxin is found in puffer fish. It can be deadly.

It is also used to create human “zombies” in Haiti, according to some research. See: Zombies in Real Life: A Man’s Horrific Experience

This ant is notorious for causing terrible pain that can last up to 24 hours. It is said that when it bites, it feels like being shot by a gun. It is said to be one of the most painful stings that an insect can deliver in the world.

This squid stalks its prey by day and attacks by night. It uses its powerful tentacles and suckers to grab the prey and its strong spear-like beak to rip it apart. It lurks below its prey, staying more than half a mile deep during the day, and surfaces for the attack at night.  Like other squid and octopus species, it can change colors, and especially when agitated. It can change to a flashing in red, which earned it the nickname “The Red Devil.”

Image of the Hooded Pitohui courtesy of markaharper1.