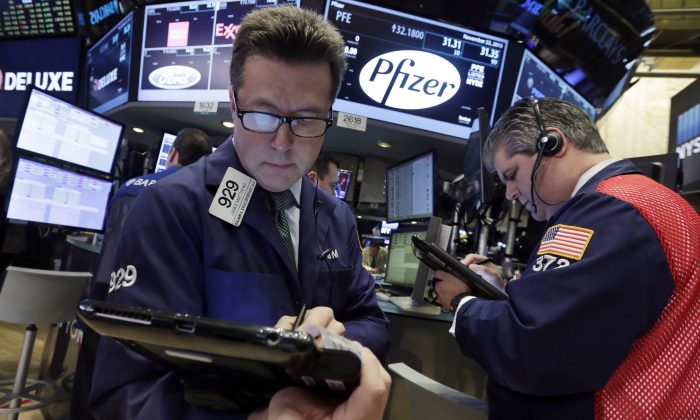 Traders James Matthews (L) and John Panin work at the post that handles Pfizer, on the floor of the New York Stock Exchange on Nov. 23, 2015. (AP Photo/Richard Drew)
Business & Markets

WASHINGTON—Pfizer and Allergan are pursuing the biggest buyout in healthcare history, a $160 billion deal that would essentially send one of the biggest U.S. corporations overseas, or at least its legal domicile and principal executive offices.

Under a maneuver known as an “inversion,” Pfizer will be able to lower its corporate tax load by reorganizing as a company in Ireland, which has a lower tax rate.

The U.S. has attempted to curb the practice, with little success, and it’s become a sensitive political issue with a presidential election less than a year away.

1. What Is a Corporate Inversion?

An inversion happens when a U.S. corporation and a foreign company merge, with the new parent company based in the foreign country. For tax purposes, the U.S. company becomes foreign-owned, even if all the executives and operations stay in the U.S.

There can be many business reasons for two companies to merge. The decision to incorporate the new parent company in a foreign country can generate significant tax savings over time.

The U.S. has the highest corporate income tax rate in the industrialized world, at 35 percent. The U.S. is also the only developed country that taxes corporate profits earned abroad. Foreign profits are subject to U.S. taxes once they are brought to the U.S., though corporations can deduct any foreign taxes paid.

Companies that become foreign-owned don’t have to worry about the Internal Revenue Service trying to tax the profits they make abroad.

Most U.S. corporations pay federal income taxes at rates much lower than 35 percent because the tax code is filled with breaks for businesses. Inversions open the door for even more.

Inverted corporations must still pay U.S. taxes on the profits they earn in the U.S. However, they can lower their U.S. tax bills through a maneuver called “earnings stripping.”

Here is how it works: The new foreign parent company “lends” money to the U.S. firm, which must pay it back. The U.S. firm then deducts the interest payments it makes to the parent company, reducing its taxable profits—”stripping” them from its balance sheet.

“You haven’t raised any new money,” said Robert Willen, a New York-based tax adviser. “All you’ve done is literally out of thin air, you’ve created a debt obligation on which the U.S. company is the debtor and the foreign parent is the creditor.”

Many U.S.-based corporations are hoarding money overseas, either to invest abroad or to shield it from U.S. taxes. Experts say the total amount could exceed $2 trillion.

If a foreign subsidiary sends profits directly to a U.S. corporation, the U.S. firm must pay taxes on it. However, if those profits are funneled through a foreign parent company that was formed through an inversion, the money can be invested in the U.S. without paying U.S. taxes.

The technique is called “hopscotching” because the money—at least on paper—bounces from country to country while avoiding U.S. taxes.

About 50 U.S. companies have inverted in the past decade, and more are considering it, according to the nonpartisan Congressional Research Service.

Many inversions have been done by healthcare companies, including Pfizer. Drugmaker AbbVie and the pharmacy Walgreen Co., had considered doing inversions but ultimately decided against it.

6. What Has Congress Done?

In 2004, Congress tried to curb inversions by saying U.S. companies couldn’t escape U.S. taxes by simply reincorporating abroad, with the same shareholders and executives running the new company. Instead, Congress passed a law saying that in order to become a foreign-owned corporation, U.S. companies must merge with a foreign partner, even if the foreign partner is much smaller.

7. Will Congress Do More?

Several Democrats in Congress have announced bills to make it harder for U.S. corporations to invert.

President Barack Obama included provisions in his 2015 budget request to limit inversions, and has called on Congress to act.

But in the current political climate, it’s hard to see House Republicans, Senate Democrats and the Obama White House all agreeing on a fix. We’re talking about taxes, and Republicans and Democrats don’t agree on much when it comes to taxes.

The Treasury Department has issued two sets of regulations designed to reduce the tax benefits of inversions, with the latest coming last week.

AbbVie called off its inversion after the Treasury first acted in 2014. However, Treasury officials say they can’t stop inversions without action by Congress.

“Our actions can only slow the pace of these transactions. Only legislation can decisively stop them,” Treasury Secretary Jacob Lew said.

9. What Do Democrats Say?

Obama and Democratic leaders in Congress have questioned the patriotism of corporate executives who elect to invert their companies. At the same time, they are trying to make it a political issue ahead of next year’s presidential election, accusing Republicans of protecting corporate loopholes.

“They are renouncing their citizenship even though they’re keeping most of their business here,” Obama once said in a speech. “They shouldn’t turn their back on the country that made their success possible.”

10.What Do Republicans Say?

Key Republicans say the only way to adequately address inversions is to overhaul the tax code, making it more attractive for businesses to locate in the U.S.

“Anything short of that and you’re not going to be able to do it,” said Sen. Orrin Hatch, R-Utah, chairman of the Senate Finance Committee.

Hatch and other Republicans say they could support limited efforts to fight earnings stripping, which many see as nothing more than a tax dodge. But in general, Republicans said they don’t like the idea of punishing corporations for trying to lower their tax bills.

U.S. companies looking to grow through acquisition have been searching fervently in recent years for overseas deals that involve a tax-saving process known as an inversion. These deals enable U.S. multinational companies to lower their tax bills by combining with a company located in a country with a lower tax rate, then reorganizing in that country to take advantage of that rate.

The data firm Dealogic says 27 acquisitions involving an inversion with a U.S. company have been proposed or completed since 2011. Those deals total more than $420 billion in value, with about $344 billion in deals being proposed since the start of 2014. Here are some of the biggest excluding debt, with the year in which they were announced.