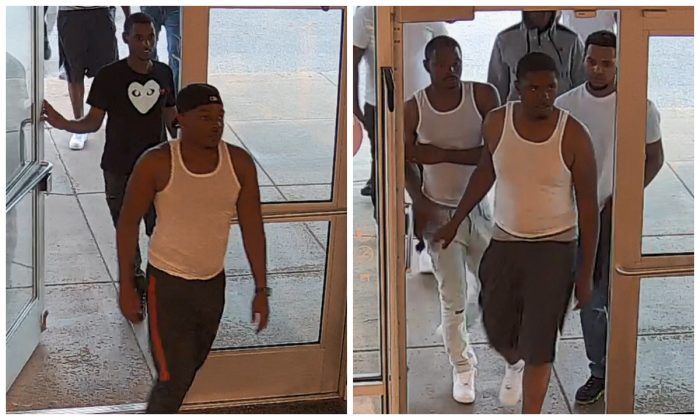 Some of the suspects of a July 1, 2019, "flash mob" theft in Pleasant Prairie, Wisconsin, entering the mall. (Pleasant Prairie Police Department)
Crime and Incidents

A newly released video shows a 10-person “flash mob” rushing into a North Face store and grabbing all the clothes they could handle.

The mob, all males, quickly took clothes from a rack full of lightweight coats and then rushed to the exit.

The theft took place at the North Face store at Pleasant Prairie Premium Outlets in Wisconsin around 7:45 p.m. on July 1.

“Ten black males entered the store and each grabbed as much merchandise as they could carry before running to the cars and leaving the property,” Pleasant Prairie Police Department Sgt. Aaron Schaffer told the Kenosha News. “It was like a flash mob.”

The males “entered the store with purpose,” Pleasant Prairie Police Chief David Smetana told ABC. “They knew exactly which area they were going to approach in the store, which clothing items they wanted.”

“They were gone from the store within 30 seconds,” he added.

None of the suspects have been arrested as of July 6.

Similar mobs have taken place in the past, Smetana noted, but “not to this level.”

“We’ve seen it before. Not to this level, in my recent history,” Smetana told Fox 6. “Through the work of our detectives in contacting other agencies and other stores they’ve seen recently, they’ve seen similar attacks go on at these stores.”

After the mob ran out, employees called the police, the police chief said.

Officials told the Milwaukee Journal-Sentinel that the men fled in three or more vehicles. A maroon Dodge Magnum and a maroon Pontiac Grand Prix had Indiana license plates. The numbers weren’t released. The third car was a small red car that police believe was a Chevrolet Cobalt or a Pontiac.

The department in a July 4 update released pictures of the males entering the outlets. At least one of the suspects was wearing a North Face shirt when he entered the mall.

Meanwhile, it was reported that another store in the same mall was stolen from in a similar manner days after the flash mob.

Investigations into both incidents are underway, including a probe of any possible link. No surveillance footage of the True Religion theft has been released.