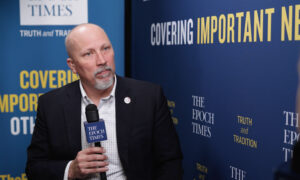 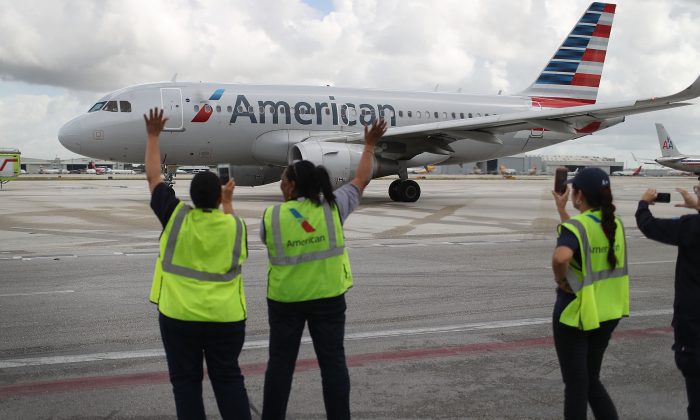 Employees wave to an American Airlines flight on the tarmac in a file photo. (Joe Raedle/Getty Images)
US

Unexpected turbulence on an American Airlines flight sent 7 crew and 3 passengers to the hospital on Aug 5.

American Airlines flight 759 from Athens, Greece, had only 30 minutes of air time before it was due to land in Philadelphia when the passenger plane hit rough air, sending drinks and passengers flying.

Fortunately, three doctors were on board. They were able to help stabilize the injured passengers and crew before the plane was receive by airlines staff and paramedics on the ground. Dr. Fang, one of the doctors and a passenger on board, told ABC that a flight attendant had dislocated his shoulder.

“We made a makeshift sling so [one passenger] could support himself before the paramedics got on board,” Fang said.

There were 299 people on the flight—287 passengers and 12 crew, and although the turbulence was short, many commented about how scary the experience was.

“There was just very slight turbulence for about 5 seconds, and then suddenly it felt like the whole plane was in freefall,” passenger Alex Ehmke told ABC.

According to witnesses, flight attendants had just finished serving drinks to the passengers when they experienced a few heart-stopping seconds of freefall.

“They were giving us our drinks. The flight attendants were in the last couple rows when they said, ‘Fasten your seat belts.’ And then they said for the flight attendants to get to their seats, and they didn’t even have time,” Ian Smith, another witness, told ABC. “It started shaking, then it took a big drop. Babies screaming, people in front of us hitting the ceilings.”

A ProPublica reporter, Jessica Huseman, was on the flight and tweeted: “This plane (that I’m still on) is soaked. Soaked. They’ll be hosing this out for hours.”

Here’s the ceiling of the plane pic.twitter.com/lKO75JVhF2

Lol guys there’s coffee inside the lights. INSIDE. God I smell terrible. pic.twitter.com/lcQ2GawaR8

Some passengers are injured as well. We all used our fleece blankets to mop the ceiling of the plane down after drinks went flying.

Huseman described the experience as “honestly, terrifying,” but thanked the flight crew for its professionalism and care.

(I am fine just covered in coffee) a crazy experience but impressed w the attendants on this @AmericanAir flight from Athens.

American has already called me, and will be calling everyone on the flight. Impressed again. Hoping for speedy recoveries for the crew.

American Airlines said in a statement, “The seatbelt sign was on at the time. Three passengers and seven crew members were transported to a local hospital for evaluation and later released.”

According to Federal Aviation Administration (FAA) officials, the severe turbulence was reported by the flight crew while the plane was over the North Atlantic Ocean.

Around 58 people are injured each year in the United States because passengers do not have their seatbelts on when turbulence occurs, says the FAA.