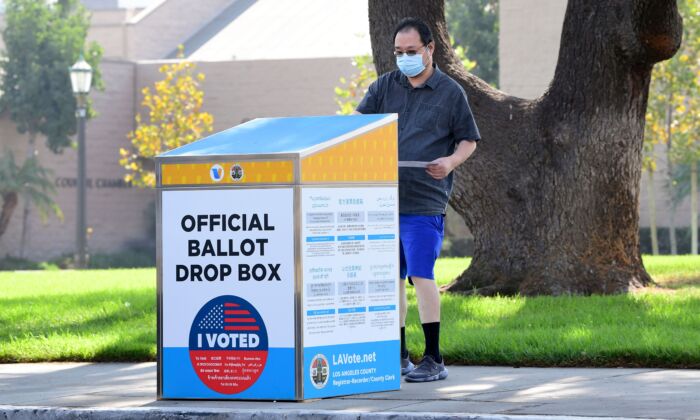 A ballot is dropped off at an official ballot drop box in Monterey Park, Calif., on Oct. 5, 2020. (Frederic J. Brown/AFP via Getty Images)
2020 Election

More than 10 million Americans have cast their votes in the 2020 general election, according to data from 38 states that make it public, compared with the fewer than 2 million who had voted at about the same point ahead of the 2016 election.

“The voting pace is truly remarkable, with five states already reaching 20 percent or greater than their 2016 total vote,” Michael McDonald, a University of Florida professor and head of the U.S. Election Project, which has been keeping the tally, said in an Oct. 11 release.

The states were Minnesota, South Dakota, Vermont, Virginia, and Wisconsin. As of Oct. 13, Wyoming had joined the list.

Early voting, either by mail or at early polling places, has dramatically expanded this year partly due to voters’ concerns about the CCP virus transmission and partly due to some states’ pushing for mail voting.

In absolute numbers, Florida is leading in early votes, counting some 1.8 million. Tied for second are Virginia and Michigan, each with about a million ballots. Minnesota, Wisconsin, and Georgia all count more than 600,000 ballots received.

More than 2.6 million registered Democrats have returned their ballots in nine states providing the party registration data. About 1.1 million have been from Republicans and some 900,000 from unaffiliated voters or those registered with one of the smaller parties.

Democrats in these states have requested more than 22 million mail-in ballots, Republicans more than 13 million, and others nearly 9.5 million.

Registrations don’t necessarily reflect who the person is voting for. By law, officials can’t start counting the actual votes before Election Day (Nov. 3).

Polling has indicated that Democrats are much more likely to say they will vote by mail this year, although the enthusiasm has faded across the political spectrum amid a stream of news pointing to issues with mistakes, mishaps, and potential mischief with mail voting.

“I’ve warned that the heavily Democratic voting at this point should not be an indicator that Biden has the election sewn up,” McDonald said. “Yes, the numbers are very good for Biden. The campaign has to be pleased since they can leverage the banked voters to more efficiently re-target their supporters who have not voted yet.

“However, it is very likely Republicans will show up in force to vote in-person.”

He says he’s seeing “plenty of evidence that we are in for a high turnout election,” given that the 2018 turnout was the highest for midterms since 1914 as well as the “record small donor activity” and the high interest and intention to vote shown in polls.

There are sizable gaps in the data—New York, for instance, doesn’t provide it. Yet, it covers all the key swing states.

“This is a typical pattern,” McDonald said. “The earliest voters tend to be older, while younger voters show up in larger numbers as Election Day approaches.”

He predicted that “in the coming weeks, the Democratic narrative will change from euphoria over the apparent large leads in early voting to concern that a disproportionately large number of younger voters have yet to return their mail ballots.”