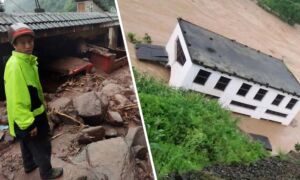 Floods, Earthquakes, and Mudslides Hit China; and Why Hong Kong Matters to the World
0
China Society

Floods in China have been raging for nearly two months since mid-May, affecting tens of millions of people in 26 provinces and cities across the country. According to the China Meteorological Administration (CMA), however, another round of heavy rainfall is expected to hit the southwestern part of the country, as well as the middle and lower sections of the Yangtze River. Not only has the rain been rampant in southern China, but the northern city of Chifeng in Inner Mongolia has also been hit by floods triggered by heavy rains. A number of towns and cities have already been flooded.