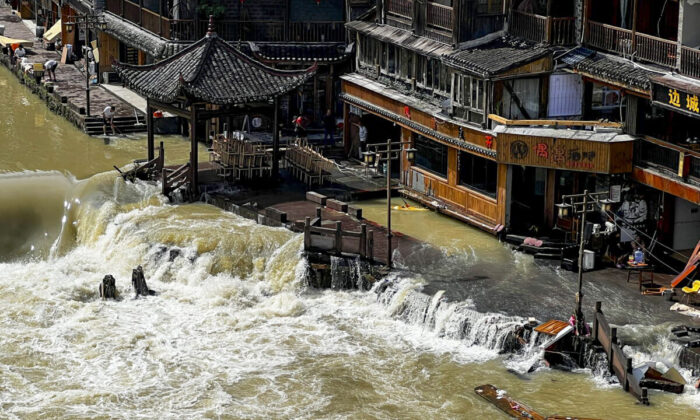 BEIJING—At least 17 people were killed and four are missing after flooding hit the central Chinese province of Hunan and a landslide buried parts of several villages in the southern Guangxi region, state media reported.

Storms have pummeled Hunan since the beginning of the month, with some monitoring stations reporting historic levels of rainfall, the state-run Xinhua News Agency said late Wednesday.

The floods have affected around 1.8 million people in the largely rural, mountainous province, Xinhua said, with more than 2,700 houses have been damaged or collapsed entirely.

In Guangxi, days of rain in Beiliu city left hillsides waterlogged and prone to slippages, Xinhua said. Seven people were confirmed dead in the landslides and one was missing.

The actual number of casualties from such events may be much higher and is difficult to verify, as the Chinese regime has a record of suppressing information that it deems harmful to its image.

Authorities have issued warnings for continued heavy downpours in Guangxi and the nearby provinces of Jiangxi, Fujian, Guangdong, Hainan, Sichuan, Chongqing, and Yunnan, Xinhua said.