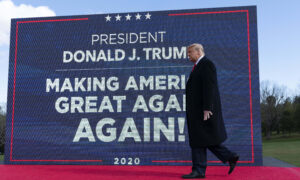 A group of 10 GOP senators on Jan. 31 called on President Joe Biden to support their alternative CCP (Chinese Communist Party) virus stimulus package and asked the president to work with them on passing the measure.

The lawmakers said in a letter to Biden that they “welcome the opportunity to work with [him] in a bipartisan manner to combat the COVID-19 virus and provide continued support to families struggling during the pandemic.”

“In the spirit of bipartisanship and unity, we have developed a COVID-19 relief framework that builds on prior COVID assistance laws, all of which passed with bipartisan support,” they wrote (pdf). “We request the opportunity to meet with you to discuss our proposal in greater detail and how we can work together to meet the needs of the American people during this persistent pandemic.”

Brian Deese, the director of the White House’s National Economic Council, told CNN’s “State of the Union” that the White House received their letter.

“We’ve received the letter and we certainly will be reviewing it over the course of the day,” Deese said. “What I will say is that the provisions of the President’s plan, the American Rescue plan, were calibrated to the economic crisis that we face.”

The proposal is about $600 billion, Sen. Bill Cassidy (R-La.), one of the lawmakers, said during an appearance on “Fox News Sunday.” That’s less than a third of Biden’s $1.9 trillion package.

Biden has said he’s open to passing portions of his proposal via reconciliation if Republicans reject the measure. That includes $1,400 stimulus checks, unemployment assistance, and funding for local and state governments.

“Our proposal also includes economic relief for those Americans with the greatest need, providing more targeted assistance than in the Administration’s plan,” the 10 senators wrote. “We propose an additional round of economic impact payments for those families who need assistance the most, including their dependent children and adults. Our plan also includes extending enhanced federal unemployment benefits at the current level and fully funding your request for nutrition assistance to help struggling families.”

“Finally, we note that billions of dollars remain unspent from the previous COVID relief packages,” the letter reads. “Just last month, Congress provided $900 billion in additional resources, and communities are only now receiving much of that assistance. Some of the spending appropriated through the CARES Act, passed last March, also has yet to be exhausted.

“The proposal we have outlined is mindful of these past efforts, while also acknowledging the priorities that need additional support right now.”