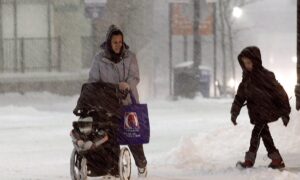 Storm Builds Over US East, Promises up to 20 Inches of Snow
0 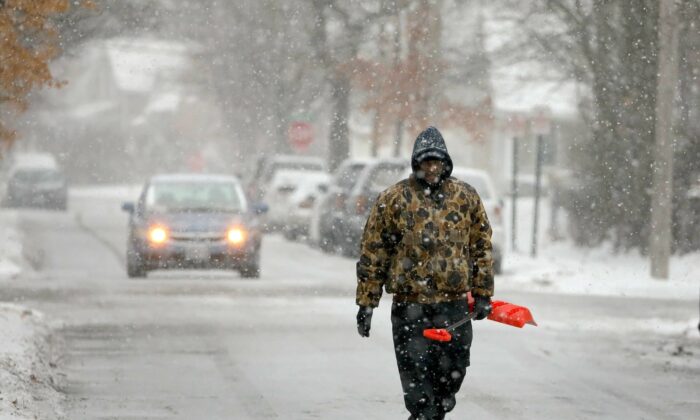 Bill Parham walks down an icy street in Maplewood, Mo., looking to clear snow off people's driveways and sidewalks on Dec. 16, 2019. (David Carson/St. Louis Post-Dispatch via AP)
Crime and Incidents

BONNE TERRE, Mo.—At least 10 people have died in weather-related crashes in several Midwestern states amid a storm that dumped nearly a foot of snow in places, forced schools to close and snarled traffic, authorities said.

The wintry weather was part of a storm system that hit parts of the Midwest and was expected to extend into the Northeast through Tuesday, the National Weather Service said.

In Missouri, the storm dumped 3 to 9 inches of snow across of the state. Much of Missouri was under either a winter weather advisory or winter storm warning Monday.

The Missouri State Highway Patrol said three people were killed Sunday night when a driver lost control and overturned on U.S. 67 in St. Francois County in the eastern part of the state. A motorist who was stranded after a previous crash and two good Samaritans who were trying to help were struck.

And in mid-Missouri’s Callaway County, an 18-year-old was killed when his vehicle went off the side of Missouri 94 and overturned.

The patrol also said in a tweet Sunday night that it had responded to 525 calls from stranded motorists and to nearly 560 other traffic crashes. The University of Missouri was starting classes late Monday because of the storm.

In Nebraska, a crash Sunday on Interstate 80 northeast of Lincoln left three passengers ages 10, 15 and 19 dead. The crash happened when the driver of an eastbound sport utility vehicle lost control amid slick conditions, struck another eastbound vehicle before veering into the median, rolling and entering the westbound lanes. The SUV was then hit by a car and a pickup truck, according to the Nebraska State Patrol.

In Kansas, the storm brought up to 11 inches of snow. The Kansas Department of Transportation said multiple roads are partially or completely snow covered. A 21-year-old man died Sunday when a pickup truck in which he was riding overturned on an icy Wichita road.

Weather also is believed to be a factor in a Monday collision between an SUV and a pickup truck that killed a woman and her adult son along a road east of Indianapolis following a night of snowfall, police said. Fifty-four-year-old Amy Cox and her 24-year-old son, Isaac Cox, of New Palestine, were pronounced dead at the scene.

At St. Louis Lambert International Airport, about 20 departing flights and 20 arriving flights were canceled as of 6 a.m. Monday due to the winter storm. Lambert said in a tweet that crews worked through night and the landing strips were in good condition.