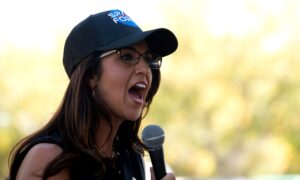 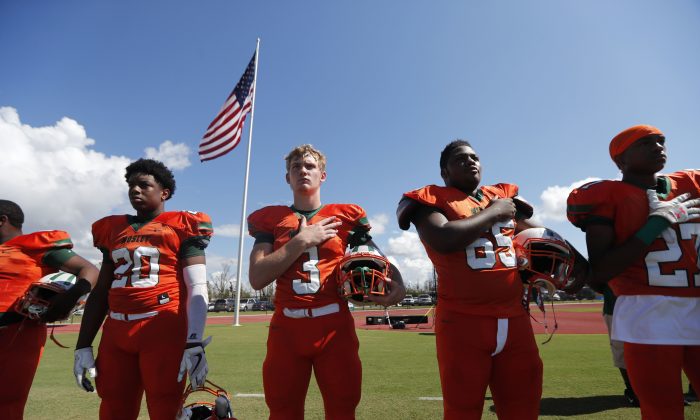 Mosley High football players hold their hands to their heart during the the national anthem, before the start of their football game against Pensacola, in the aftermath of Hurricane Michael in Panama City, Fla.,, Oct. 20, 2018. (AP Photo/Gerald Herber
US News

PANAMA CITY, Fla.—Castor Gay knew his life had changed the moment he watched his back fence disappear into the howling wind and water started pouring from his ceiling.

Mike Maddox sensed the same thing when he packed into a tiny pantry closet with his mom, brother, and five dogs while his house shook.

Hurricane Michael delivered quite a punch when it hit the teenagers who make up the Mosley High Dolphins football team.

But just 10 days later, under the bright sunshine at Tommy Oliver Stadium in downtown Panama City, a small return to regular life had already begun. Gay was back in his bright orange, white and green jersey while doing his job on the offensive line protecting Maddox, who was once again a quarterback.

For a few hours, football was important again.

And the Dolphins were ready to punch back against the Pensacola Tigers.

“We ain’t got to hit nobody in the mouth in a couple weeks,” Mosley coach Jeremy Brown said as his voice rose to a crescendo during an emotional pregame speech. “We ain’t been able to practice because we ain’t got no field because all our fields have nails and roof tacks all over them. But there ain’t none of them out there on this field today.”

In many ways, it was almost shocking to see football being played in the midst of such widespread devastation. From the higher seats of the stadium, the effect on Panama City was evident, with debris, utility crews and snapped pine trees as far as the eye could see.

The storm’s death toll was up to 25 in Florida, and 35 overall across the South. As of Saturday morning, more than 100,000 Florida customers were still without power.

There was a FEMA trailer in the parking lot and during game timeouts, officials talked about city-wide news like electricity, water and gas issues to an estimated 1,500 fans in attendance. But for the most part, it was a joyful gathering where everyone forgot their worries. Fans, football players, cheerleaders and band members from several area schools were at the game.

“Man, this is great,” said Nate Starr, the lead game official whose home in Callaway was heavily damaged during the storm. “It gets the community together. We’re all family now.”

Frank McCall, who has two sons on the Mosley team, acknowledged that when he first heard about Saturday’s game, he thought it was crazy. But after realizing admission and food would be free and it would provide an escape for the community, he changed his mind.

“Sports are always the one thing, that regardless of race or religion, always brings people together,” McCall said.

In many ways, Hurricane Michael was an equalizer for the diverse population of Panama City. There was hardly any home that was spared the storm’s wrath and everyone at Saturday’s game could commiserate about insurance adjusters, fallen trees, shattered houses, and altered lives.

Gay’s house is in Lynn Haven, a hard-hit suburb just north of Panama City. He said his family prepared for the hurricane in the usual way, grabbing some puzzles and downloading a few movies as they prepared to go without power for a day or two and then go about their lives.

“This wasn’t going to be a normal hurricane party,” Gay said.

Much of Gay’s time since the storm has been spent picking through the remains of his house in the stifling north Florida heat.

Tarps covered the roof. Shingles lay everywhere outside. He’d lost a lot — but not his humor.

“I just try to look at the bright side,” Gay said with a grin. “Me and my parents always wanted to redo our front porch and flower bed, kitchen and living room. This certainly gives us the chance to do that.”

About a mile away, at Maddox’s house, he and his family had spent an hour in a closet under a staircase with their five dogs as the worst of the storm hit. A few windows were blown out and water got into some rooms.

Like several other Mosley players, Maddox spent much of the past 10 days at the houses of out-of-town friends or relatives who had power. Communication with teammates was difficult.

Many of them thought the football season was lost.

Then Brown began to spread the word: The Dolphins would practice on Thursday in an effort to get ready for Saturday’s game. When a little more than half the roster gathered under the shredded roof of Mosley’s football office — including most of the starters — the game was on.

“There were a few tears shed,” Maddox said. “It was more emotional than I thought. But that’s a good thing.”

The 43-year-old Brown said the best part of the first practice was being able “to put all our arms around these boys and hug them.” Like his players, Brown and his family — which include four kids ages 6 to 17 — are dealing with storm damage.

But Brown said it was important that he also concentrate on his “second family.”

That’s why police lieutenant Mike Renaldo, who works for the Bay District Schools department, said it was so important to have a few hours of fun. Just like everyone else, he’d spent the past week and a half sweaty and stressed out.

He took a big bite out of a fresh hot dog and smiled.

“You should go grab one of these: It sure beats an MRE,” he said with a grin, referring to the ready-to-eat meals many had been eating for days.

As for the game, the fans saw a great one, but Pensacola rallied to beat Mosley 24-21. Gay was emotional afterward, but not because the Dolphins lost. He suddenly realized that for a few moments, when he was sweating and pouring out his emotions on the football field, it was like Hurricane Michael had never happened.

“I felt better than normal, felt like old again,” Gay said wiping away tears. “There was no loss. Nothing. It was all back. I don’t care about the scoreboard — I’m back with my friends, family, and brothers.”